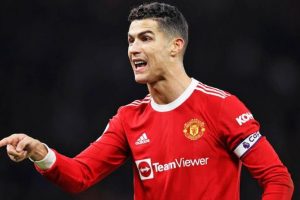 Man United in 2021: Ronaldo's return, Ole out and Rangnick revolution

Cristiano Ronaldo is fed up with Manchester United’s board for their ‘erratic sporting decisions’, according to reports. The Portugal international has bagged 14 goals across all competitions ahead of Monday night’s FA Cup tie with Aston Villa. Yet despite being one of the shining lights of his team’s campaign, he’s far from happy with life back at Old Trafford.

Ronaldo’s return was meant to be a catalyst for United, who believed his arrival could turn them into Premier League title contenders.

Things started well enough, with the 36-year-old bagging a brace on his second debut against Newcastle.

However, ever since, United have fallen apart – to such an extent their hopes of Champions League qualification are now on the line.

United will go up against Aston Villa in the FA Cup this evening, in a match the Portugal international is expected to start.

Yet Catalan publication Sport say that, prior to that contest, the Portugal international is fed up with United’s board for what he perceives to be ‘erratic sporting decisions’.

Ronaldo, throughout his career, has won the lot.

Despite entering the twilight years of his career he still has the fire in his belly to be successful at the highest level.

Yet he’s unhappy at the club and is also said to feel the arrival of Ralf Rangnick hasn’t brought the stability he was hoping for.

Under the former RB Leipzig and Schalke boss, United have had mixed results so far.

They’ve secured victories against Crystal Palace, Norwich City and Burnley but also failed to beat the likes of Young Boys, Newcastle and Wolves.

The report adds that Ronaldo could even be offered to Barcelona now his second spell at Old Trafford hasn’t worked out.

His agent, Jorge Mendes, is said to have a close relationship with Barcelona president Joan Laporta – who recently insisted they were able to compete for the best and biggest players on the planet.

It would be hard for Barcelona to afford a deal, despite Laporta’s comments, given they’ve struggled to register Ferran Torres.

But with Ronaldo’s rage beginning to rise, it’s feasible he’ll try and leave the club for a second time at the end of the season.

The Portugal international has several options, as well as Barcelona, should he decide to jump ship.

Former club Real Madrid, where he spent nine successful years, would perhaps be interested in snapping him up.

Especially with Carlo Ancelotti at the helm, with the Italian previously coaxing the best from Ronaldo during his first spell at the Bernabeu.

Paris Saint-Germain may lose Kylian Mbappe on a free transfer in the summer, with Real at the front of the queue to snap him up.

So, if that happens, the Ligue 1 giants may pursue Ronaldo as a possible replacement.

An outside option for the United star is a move to the MLS, who have housed many big names over the years.

LA Galaxy and New York City are two clubs who could, perhaps, try and bring Ronaldo to the United States.

And whether he’s able to put his issues with the United hierarchy to one side, starting with tonight’s match with Aston Villa, remains to be seen.

Former Manchester City star Trevor Sinclair, meanwhile, thinks his old side dodged a bullet by not signing Ronaldo in the summer.

“I’m starting to think that Manchester City dodged a bullet by not signing Cristiano,” he said.

“You look at some of the players that are struggling for form at Manchester United, young players, [Jadon] Sancho, [Marcus] Rashford, they are really struggling for good performances.

“Of course you can [blame Ronaldo]. Know your role, you’re a footballer, you’re hired by the football club.

“Keep your mouth shut because at times that’s the best thing to do. He’s causing a lot of problems at the football club.

“Not just his lack of goals in recent times, but the fact that Ole [Gunnar Solskjaer] has gone and Michael [Carrick] went in and dropped him for a game.”