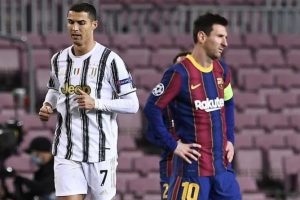 Former Crystal Palace chairman Simon Jordan has labelled Cristiano Ronaldo and Lionel Messi “rats” after they ditched Juventus and Barcelona this summer. Ronaldo has walked away from Juventus after a disappointing season in Italy.

The Portugal international was signed from Real Madrid with the hope he would help Juventus win the Champions League.

But Andrea Pirlo’s side failed to land success on the European stage – and they only just scraped fourth place in Serie A last term.

That led Ronaldo’s agent Jorge Mendes into hunting for a new club and he was able to convince Manchester United to re-sign the forward.

Earlier in the summer another one of the game’s greatest ever players, Lionel Messi, was move onto pastures new.

Messi linked up with his former Barca team-mate at Paris Saint-Germain – but Jordan has taken aim at 34-year-old.

“There’s an argument to be said, Messi and Ronaldo are like rats that are deserting financially sinking ships,” Jordan fumed on talkSPORT.

“When I see United and I see players like Mason Greenwood yesterday who was absolutely electric, it makes me think about the transaction that has gone on here.

“It’s playing into the gallery from the Glazers point of view – ‘look at us, look at what we’ve done for you guys, we’ve brought something back that no-one thought we could’.

“If he’s making statements that the player is going to start as a matter of course and people are going to have to get used to it, well, I don’t know about that because players should be picked on merit.”

Ronaldo is expected to make his first appearance for United against Newcastle after the international break.

Meanwhile, Messi made his PSG debut from the bench in the 2-0 win over Reims on Sunday.