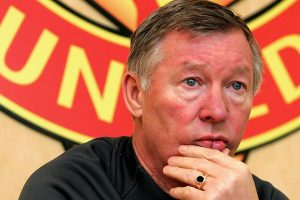 Sir Alex Ferguson generally got things right in the transfer window during his remarkable reign at Manchester United.

He also had his fair share of misses – see Bebe, Kleberson, Juan Sebastian Veron and more.

But one stood out in the eyes of the legendary Scot – Owen Hargreaves.

“He was one of the most disappointing signings of my career,” Ferguson wrote in his autobiography.

Hargreaves arrived from Bayern Munich for a fee of around £17million after year-long negotiations, which started after he impressed for England in the 2006 FIFA World Cup.

United needed to replace their iconic leader Roy Keane and Hargreaves was their man – although Ferguson had some doubts from the beginning.

“I look back less fondly on our move for Owen Hargreaves, who was phenomenal in the summer of 2006 and was just the type of player we needed to fill the gap left by Keane,” Ferguson wrote.

“We started to put together a bid for him. But I studied his playing record and felt a tinge of doubt. I didn’t feel a strong vibe about him.

“David Gill worked hard on the deal with Bayern. I met Owen’s agent at the World Cup final in Berlin. Nice man, a lawyer. I told him we could develop Hargreaves at United.”

By the time he arrived, there was plenty of buzz and he went on to win the Premier League and Champions League during his very first season.

At that stage, it was all going swimmingly.

“It turned out to be a disaster,” Ferguson concluded.

After scoring a penalty in the Champions League final win in Moscow, Hargreaves played just five more games for the club.

He suffered ongoing injury problems after suffering tendinitis in his knee, but Ferguson attributed some of the blame to the midfielder.

“Owen had no confidence in himself whatsoever,” Ferguson wrote. “He didn’t show nearly enough determination to overcome his physical difficulties, for my liking.

“I saw him opt for the easy choice too often in terms of training. He was one of the most disappointing signings of my career.

“He went everywhere in search of cures for his various injuries: Germany, America, Canada.

“I felt he lacked the confidence to overcome his injuries. It went from bad to worse. He was away in America for the best part of a year. He saw Hans Müller-Wohlfahrt, the club doctor at Bayern Munich, for his calf.

“In the games he did actually play, I had no qualms about his contribution. He was lightning quick and a great set-piece deliverer.”

But to rub salt in the wounds, he made the move to local rivals Manchester United and later hit back at Ferguson’s comments by claiming he received superior treatment across the city.

He claimed he was treated like a “guinea pig” at Manchester United and said "a change of scenery, sadly enough, was essential" for his rehabilitation.

"The guys here [City's medical staff] have been great so far,” he added in an explosive interview with The Guardian. “I’ve been here three weeks and you can already see the difference. I knew it was all there. It was just a matter of doing things right.”

Having already been left frustrated by Hargreaves, Ferguson now found himself on the defensive amid accusations of mistreatment blended with praise of their rivals for picking up the pieces.

Understandably, but in a rare case for Ferguson, he hit back.

United issued a strong denial in a statement, whilst Ferguson later went in-depth on the Hargreaves situation in his book.

He did not hold back, claiming Hargreaves had "created his own agenda" in a brutal parting shot.

“One of his allegations was that we picked him for the Wolves game in early November 2010 when he had asked not to be selected,” Ferguson wrote.

“Rubbish. Three weeks before that fixture, he had advised us that he would be ready for such and such a date, which happened to be a European tie. I was reluctant to bring him back in a European game after he had been out for so long. There was a reserve game that week, which he was meant to play in, but he withdrew.

“In the week of the Wolves game, to my knowledge, he said nothing to our staff to indicate he had a problem. My concern, which I expressed to Mick Phelan, was that he would pick up an injury in the warm-up. My understanding was that he told one of the players he was feeling his hamstring a bit.

“When he came in from the warm-up, I specifically asked him: ‘Are you all right?’ I said it to reassure him. My message was: enjoy it. Well, he lasted five minutes. His hamstring went. But it was no surprise.

“When I signed him, there was something about him I didn’t like. The thing every good leader should have is an instinct. Mine said to me: ‘I don’t fancy this.’ When he came over to Old Trafford for the medical, I still had some indefinable doubt. He was very hail-fellow-well-met. Almost too nice.”

The attack on Hargreaves in Ferguson’s autobiography raised eyebrows when it was published in 2013.

Hargreaves said he was “surprised” by the comments at the time and “disappointed” by how his career at United ended.

He resisted the urge to continue the war of words and aimed to put the matter to bed, but getting into a public row with United's greatest ever manager was only ever going to end with one winner.

Regardless of the rights and wrongs, the public complaints from both Ferguson and Hargreaves directed at one another did little to help the legacy of a member of one of United’s greatest sides.

His time at Manchester City lasted just one year and yielded only one Premier League appearance, albeit in a title-winning campaign.

Yet his fleeting stay at the Etihad certainly did not do the damage to his reputation that was caused by his disappointing stint at Old Trafford.