Coventry and Birmingham played out a goalless draw in a battle of tenants versus landlords at St Andrew’s.

Meeting for the first time in the league since Coventry began using Birmingham’s ground as their temporary home, opportunities were few and far between in the Championship clash on Friday night.

It would have been a welcome clean sheet for Coventry at least, who have shipped more goals than any other side in the second tier so far this season. They remain precariously positioned, however, just one place and two points above the drop zone. Birmingham, meanwhile, moved up to 14th ahead of the rest of the weekend’s action.

Both sides struggle to create chances at St Andrew’s 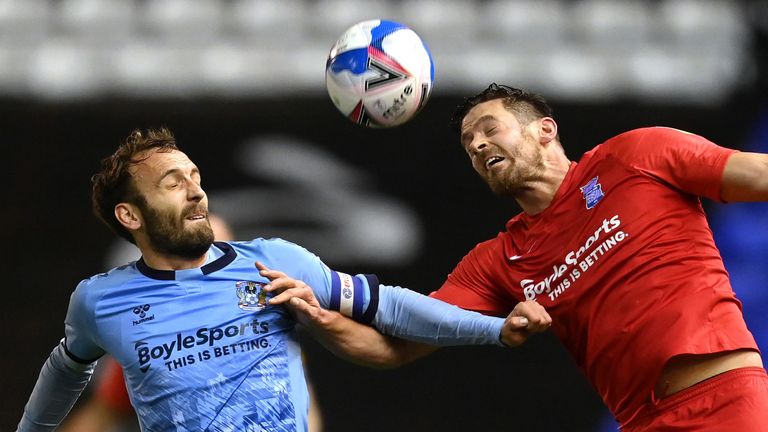 In an attempt to solve their defensive issues Coventry boss Mark Robins switched to a back four, and it led to a somewhat cautious first half.

Chances were few and far between, but both did have an opening. After 14 minutes, Lukas Jutkiewicz was presented with a golden opportunity from a Mikel San Jose cross, but could only head wide.

At the other end on 23 minutes a ball in behind the Birmingham defence bounced kindly for Tyler Walker, but the Coventry striker’s unconventional chinned effort – admittedly he was trying to head it – was well held by Neil Etheridge.

It took half an hour of a cagey second half to produce the first shot on target. It fell the way of San Jose as he drove in an effort from the edge of the Coventry area, but it was easily saved by Marko Marosi.

After 82 minutes, though, Marosi was forced into a brilliant stop to earn Coventry a point, tipping a Jutkiewicz header off the bar when it seemed destined for the net.

Both managers had the option of five substitutes each again for the first time this season, but Coventry used just three and Birmingham one, as both sides eventually settled for a draw.

Coventry’s Mark Robins: “We’ve got to take the psoitives and I was pleased with the clean sheet. It was scrappy, they came to block off spaces and did it well. They are always a threat from set plays and could have nicked something.

“Marko made a great save [from Jutkiewicz], but other than that it’s been a decent night’s work. I’ll take the point and move on.”

Birmingham’s Aitor Karanka: “We could have won this game and these are the kind of games you [look back on].

“Jutkiewicz is one of the best strikers in the league. He missed two clear chances today but will score in the future. He’s very important for us.”

Man of the match – Tyler Walker

If Coventry were ever going to get a goal at St Andrew’s, it would have been down to the industry of Walker up front. He provided a consistent threat in behind the Birmingham defence, but found support sorely lacking whenever the opportunity to produce a cutback or a pass to a team-mate arose.

Birmingham are back in Championship action on Tuesday night at Luton in a 7pm kick-off, while Coventry host Cardiff on Wednesday at 7.45pm.

Arsenal player ratings vs Wolves: Aubameyang gets a four as Arteta’s side lose again

Football: Spurs return to summit with hard-fought draw at Chelsea