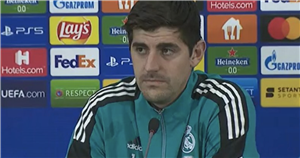 Real Madrid star Thibaut Courtois has hit out at the governing body after being snubbed for one of the five Best FIFA Men's Goalkeeper award nominations ahead of the January ceremony.

The former Chelsea stopper has won the La Liga and the Premier League twice apiece across his 12-year senior career, earning 94 caps for his country since his 2011 debut.

Despite being recognised as one of the best goalkeepers in the world, he has missed out on a nomination for the FIFA award behind Alisson, Edouard Mendy, Gianluigi Donnarumma, Kasper Schmeichel and Manuel Neuer.

Courtois, who won the award outright back in 2018, also suggested that his previous comments about FIFA and UEFA might've made a difference, despite the fine form of his counterparts.

The Belgium international said: "For me, the team trophies are always more important. I’d rather win the Champions League and La Liga this year over those individual trophies.

"What happened with The Best doesn’t surprise me too much, given what happened a month ago [when criticising the calendar]. Maybe it’s because of some comments I made.

"I don’t know who decides these things. There are other great goalkeepers there.”

That comes after the former Chelsea stopper accused UEFA and FIFA of prioritising revenue over the welfare of players after Belgium's Nations League third-place play-off.

Is Courtois one of the best five goalkeepers in Europe? Tell us in the comments section

He said: "This game is just a money game and we have to be honest about it.

"We just play it because for UEFA it's extra money.

"This just shows that we play too many games."

Real Madrid boss Carlo Ancelotti has since backed his goalkeeper.

He said: "There are many good goalkeepers in Europe. Others are going to choose [who wins the award], what are we going to do about it?

"For him, it is more important to win LaLiga or the Champions League than an individual trophy."