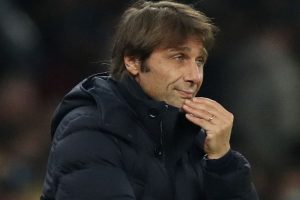 How long will it take for Antonio Conte to realise he's boarded some sort of tragic roundabout at Tottenham?

How long before it dawns on him that unless Daniel Levy stops it from spinning, Spurs will not be enhancing his impressive CV, no matter how long his return to London lasts?

This week we saw a different Spurs manager suffer the same old fate, when the London club flirted with some silver but ended up brassed off following their Carabao Cup semi-final defeat to Chelsea.

Spurs continue to be the bridesmaids and unless Conte can somehow land the FA Cup this season, the trophy drought will extend into a 14th year.

But if someone of Conte's winning mentality, drive and proven acumen cannot manage to walk Spurs down the aisle as the bride, then where does this leave them?

Chairman Levy must be sick of the sight of Thomas Tuchel, considering the Blues have now beaten Spurs three times this season.

The rivals will meet again, at Stamford Bridge, next weekend and Levy must be dreading the short trip across the capital already.

But if he has genuine ambitions of giving Conte the tools he needs to make Spurs a force in English football, he will also appreciate that the German has done him a huge favour moving forward.

Whether Levy decides to take advantage of his blessing in disguise remains to be seen.

Yet the gulf in class that existed between Tuchel's European champions and Conte's disenchanted wannabees in both legs of the semi-final was the most brutal evidence yet the Spurs supremo needs to give the Italian what he wants – otherwise the end game will be depressingly familiar.

Only this time the outcome might just see Conte smash the status quo and make Levy's decision for him by walking out.

Conte is no fool and he doesn't suffer them either. Whatever Levy said in November to lure him to the Tottenham Hotspur Stadium had to have some substance, otherwise he wouldn't have taken the job.

Which makes the summer transfer window one of the most defining in Spurs' recent history.

Conte is used to getting what he wants, otherwise he tends to find a new challenge. But then again, so is Levy.

But this is not the time to be stubborn and proud. Between now and the start of next season, the two of them need to decide who is coming and going from Spurs – and make it happen.

Conte has not come to Spurs to tread water. He lives for success and silverware and will now know he doesn't have a squad close to reaching his demanding standards.

The gap between Spurs and the big three of Manchester City, Liverpool and the Blues is big and getting bigger.

The trio are charging off into the distance and Conte will not hang around too long to get dust kicked in his face, with rumours growing he is becoming more and more disillusioned.

To achieve his ultimate goals Conte is reliant on his bosses showing the same sort of ambition he has.

Levy pulled off a rare masterstroke when landing the former Juventus and Inter Milan boss and cannot afford to throw away what is a wonderful opportunity for his club to make genuine progress.

Failing to take it would be akin to renting a Ferrari and then refusing to put the right petrol in it.

This summer should be one of huge celebration for the R&A, as the oldest Major in golf returns to the home of golf to mark its 150th anniversary.

The Open Championship will take place at St Andrews in July – and the great and good of the game will all be there to mark the occasion.

Under normal circumstances, Prince Andrew would be at the forefront of all the photographs that are sure to be taken in front of the iconic old clubhouse behind the 18th green.

He loves his golf does our Andy, so much so that down the years he's found the time out of his busy schedule to travel the world gracing some of the greatest courses imaginable, on the back of his countless patronages and honorary memberships.

But his infamous and freeloading ride on the golfing gravy train has now come to a sudden and humbling halt, following the news the Queen has stripped him of his honorary titles.

The disgraced Duke, 61, is facing a possible sex-case trial in the United States and now finds himself ostracised by his own family.

And if the R&A had a backbone it would do the same and strip him of the honorary membership he's had since 2013, because there's nothing honourable about his reputation now.

The sport doesn't need him casting a dark cloud over what will be a special and historic moment.

The Prince, who is also a past captain of the R&A, is now regarded as a 'private citizen'.

So if he wants to go to St Andrews this summer to watch the tournament fine, but he should be made to queue for tickets like everyone else.

Andy Murray – The British legend reached his first ATP Tour final since 2019 after fighting back from a set down to beat Reilly Opelka at the Sydney Tennis Classic, although lost.

Travis Head – Produced a swashbuckling century to kick-off the fifth Ashes Test in style as Australia continued to pile the pain on sorry England in Hobart.

Tom Watson – The golf legend has been named as an honorary starter at the Masters, along with Jack Nicklaus and Gary Player, when it tees off in April.

Michael Masi – The F1 race director is facing growing calls to quit in the wake of his role in depriving Lewis Hamilton of a record eighth world title in the final race of the season in Abu Dhabi.

Granit Xhaka – The Arsenal buffoon picked up the FIFTH red card of his Gunners career in the goalless draw at Liverpool in midweek. Madness.

Emma Raducanu – The teenage sensation made a horrendous start to 2022 after being thrashed 6-0, 6-1 in just 55 minutes by Elena Rybakina in Sydney ahead of the Australian Open.