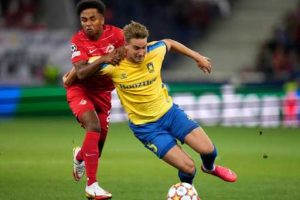 The Colorado Rapids are set to dip back into the European transfer market.

The Rapids are close to finalizing a deal for 28-year-old Danish center back Andreas Maxsø from Danish Superliga side Brøndby IF, a source confirmed to The Post on Thursday. The deal is subject to final league approval, in addition to a formal medical and visa process.

According to Farzam Abolhosseini of the Danish newspaper BT, the Rapids offered Maxsø a three-year deal plus an option for a fourth season. International transfer expert Fabrizio Romano also confirmed the report.

Maxsø was a fan favorite at Brøndby for a reason: He was a three-year captain of the club. He also had stints in Turkey, Switzerland at FC Zürich, and a German third-division side before settling back in his native Denmark.

Standing at 6-foot-3, he is known for being a tenacious aerial defender and strong passer. In his time since joining Brøndby, he has scored five times across 96 appearances, and was also a big part of building back the club culture. He was the club player of the year in 2020, and helped win the Danish Superiga in 2021, its first title in 16 years.

Abolhosseini told The Post that Maxsø is considered to be an elite athlete that loves to train hard. He was also described as being devoted to his craft and “a true leader in the dressing room and on the pitch.”

He has represented Denmark twice at the senior international level.

It appears to be a significant addition for the Rapids back line, as Colorado is seeking to return to the 2021 defensive work rate that helped the team reach the top of the Western Conference. Last year the back line was bogged down by inconsistent play and took a considerable step back, conceding 57 goals as the Rapids missed the playoffs.

The addition comes on the heels of Wednesday’s news that the club is close to signing Premier League midfielder Connor Ronan from Wolverhampton Wanderers.

The Superliga and specifically Brøndby have become a hotbed for MLS teams to recruit from, as Philadelphia Union’s Mikael Uhre, and 2022 MLS MVP Hany Mukhtar both have come from the Danish club.

Colorado will play its first preseason game Thursday in Mexico against Celaya, with games next week against Zacatecas on Tuesday and Liga MX side Querétaro Jan. 29.