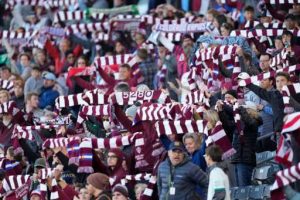 It’s already been a busy week for the Colorado Rapids as the team is close to finalizing a pair of international signings at center back and central midfield, but there’s still a few news and notes to hash out.

Major League Soccer announced Friday the groups for the 2023 Leagues Cup — a revamped 47-team tournament between MLS and Mexican Liga MX teams set to kickoff July 21 and run through Aug. 19. There will be 15 groups of three teams, which were based on geography and 2022 performances.

Colorado will face Nashville SC and 10-time Liga MX winner Toluca, as the Rapids were placed in the fourth group in the Central region. Nashville was the highest seeded team in the group and will host two games, while Colorado will likely host Toluca at Dick’s Sporting Goods Park, with the full schedule and bracket set to be released in the coming months.

“We’re incredibly excited to take part in the inaugural edition of Leagues Cup, which is one of the most compelling initiatives in world soccer,” Rapids general manager Pádraig Smith said in a statement. “The opportunity to face off against some of the top teams in our confederation while providing fans with a unique experience is something we’re very much looking forward to.”

The entire group stage listing can be found here.

South of the border, Colorado opened its preseason with a 3-0 win over Mexican second-division side Celaya FC Thursday afternoon in Santiago de Querétaro, Mexico

Green Valley Ranch product Darren Yapi scored twice, while Diego Rubio scored to put the game away. All three goals came in the second half.

Yapi, who recently returned from the U.S. Under-19 Men’s National Team camp, scored his goals in the 63rd and 90th minutes, while Rubio’s came in the 87th minute. Yapi started 15 times for Rapids 2 last year in addition to appearing in 11 senior team games as he totaled over 1,400 minutes.

The first half saw a few new faces get the start. Both Calvin Harris and Kévin Cabral performed well, while Cole Bassett slotted back into midfield.

The Rapids will face Mineros de Zacatecas on Tuesday.

Amadou, a 20-year-old Cameroonian, was electric in midfield since he joined the team halfway through the 2022 season. He made 10 starts in 15 games and tallied three assists.

It’s the second transaction of 2023 for R2, as Vargas signed last Friday from Tacoma Defiance where he was named to the MLS NEXT Pro Best XI with 13 goals and six assists last season.