There is a long way to go, but Manchester City will need a stirring Pep talk if they are to chase down Liverpool in Premier League title race… NOT the prickly Guardiola of recent weeks

There was an excellent moment in the depths of Ukraine, three months ago, when the problem which now threatens the notion of a Premier League title race was characterised by Pep Guardiola as a test of his cognitive skills.

‘For three or four months I don’t know what will happen,’ the Manchester City manager said, 24 hours after John Stones had joined Aymeric Laporte on the treatment table, leaving a gaping hole in his defensive resources.

Guardiola lingered late, answering obscure questions about the Kharkiv property market and Ukrainian football after a 3-0 win over Shakhtar Donetsk. He was impressive. ‘Bring it on,’ he seemed to be saying. 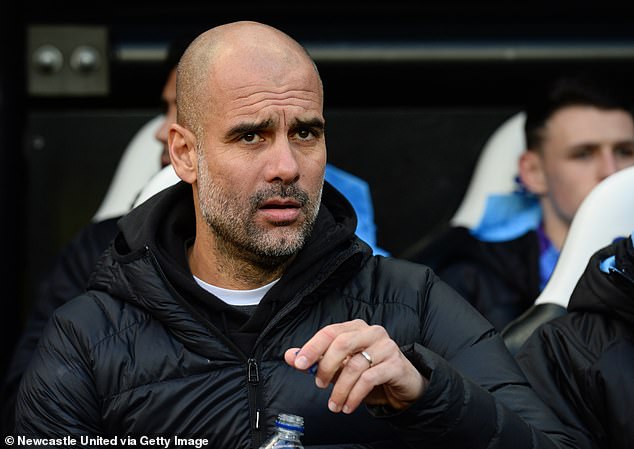 The contrast with what, at times, was an excruciating press conference in Manchester on Monday could hardly be more striking. In the 15 games since that night in eastern Europe, City have kept just five clean sheets and are on a run of seven games without one.

But Guardiola’s reluctance to discuss entirely justifiable questions posed by the BBC — about why Fernandinho is not operating in midfield again when Nicolas Otamendi is on the bench — felt like little more than a sulk.

‘We are happy with our defence,’ and, ‘We are not good enough; we improve,’ were two of the responses, so contradictory that it was hard to tell whether the latter was sarcasm. Silence fell several times as the room waited for elaboration that never came. Someone ended the awkwardness by asking his views about Burnley. 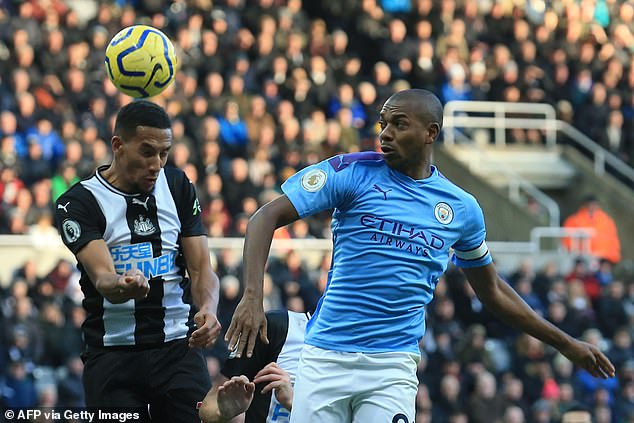 We’ve been witnessing the gloom from Guardiola for a number of weeks, as Liverpool’s lead over his team has widened to 11 points.

His observation after victory over Chelsea two weeks ago was that tennis players and golfers lose sometimes, so it’s fine for City to accept the same. Extraordinary.

He’s been like this before. In the 2011-12 season at Barcelona, Jose Mourinho was proving an intense rival at Real Madrid.

‘We are not going to win La Liga,’ said Guardiola, flatly, after his side had beaten Atletico Madrid 2-1 away in late February. Many felt that was defeatism, with 14 games left, so he toned things down a few days later, saying there was ‘little chance’ they could close the gap. Real won the league. 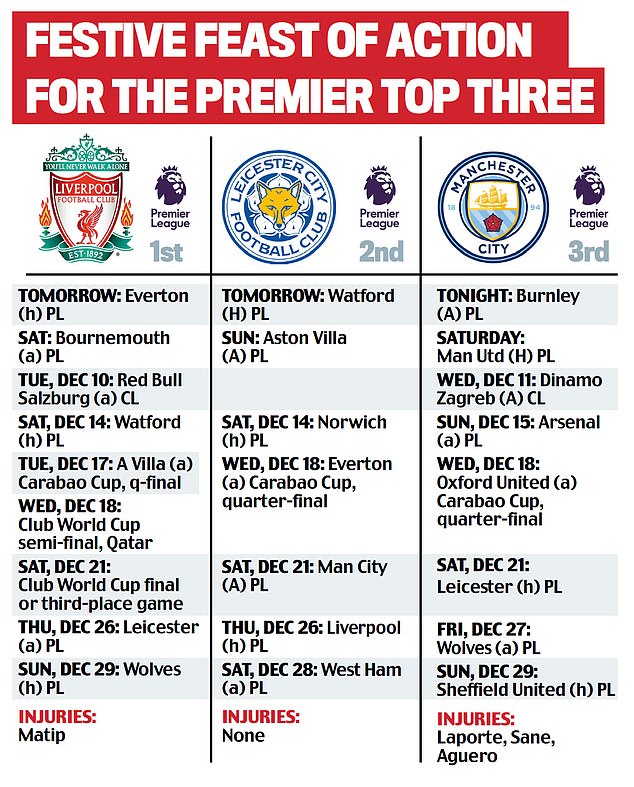 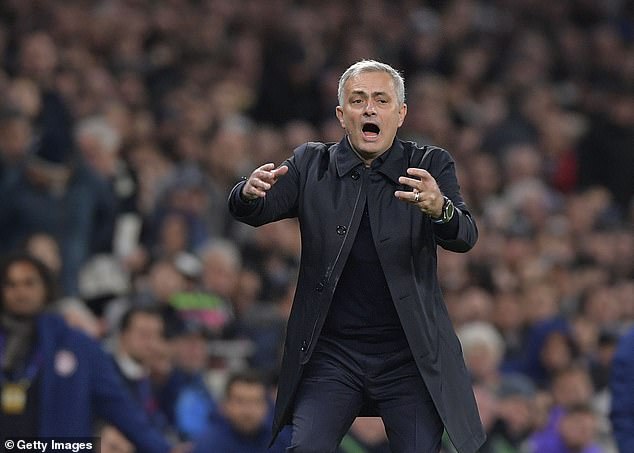 For the sake of the Premier League’s competitive balance, it is to be hoped that he can put away this despondency.

Of course City can still win the league. Their December fixtures are not dissimilar to Liverpool’s — both face Leicester, Wolves and have a derby to negotiate. But despite dropping just two points, Liverpool are not winning with conviction and are about to encounter a month like no other.

While City have qualified for the Champions League knockout stage, Liverpool face a difficult trip to Salzburg, requiring a point to ensure passage against a free-scoring side boasting prodigious Norwegian forward Erling Braut Haaland. Then there is the energy-sapping trip to Qatar for the Club World Cup, which ends five days before their Boxing Day visit to the King Power Stadium.

The key moment in Manchester United’s title of 2009 was put down by Sir Alex Ferguson to winning at Stoke five days after winning the Club World Cup in Japan. It’s not entirely fanciful for Liverpool to drop points in one of their three games before then and then lose at Leicester. City could then narrow the gap to six points if their points return is impeccable. 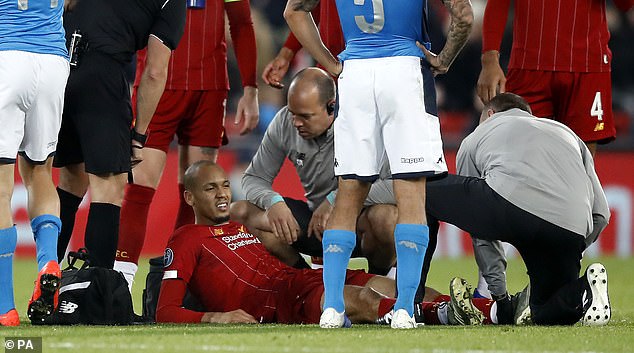 In an 11-year managerial career, Guardiola has never had to make up a lead as large as Liverpool’s 11 points. It is a monumental return, of course, but don’t discount a level of pressure and noise amid the quest to secure a 19th title, 30 years after the last.

It’s unknown terrain for a side likely to be without Fabinho until next year because of ankle ligament damage. He shields a defence which, despite featuring Virgil van Dijk, is only marginally more convincing than City’s. Their sequence of games without a clean sheet has extended to 12 — the club’s worst run since 1998.

Leicester’s title challenge feels less potent, not least because title winners require several players to share the burden of goals — Jamie Vardy’s 24 and Riyad Mahrez’s 17 in the 2015-16 season, for example. Vardy is the Premier League’s top scorer with 13 goals, but James Maddison and Ayoze Perez are Leicester’s second highest scorers with a far more distant four each, Perez’s total inflated by a hat-trick in the 9-0 annihilation of Southampton. 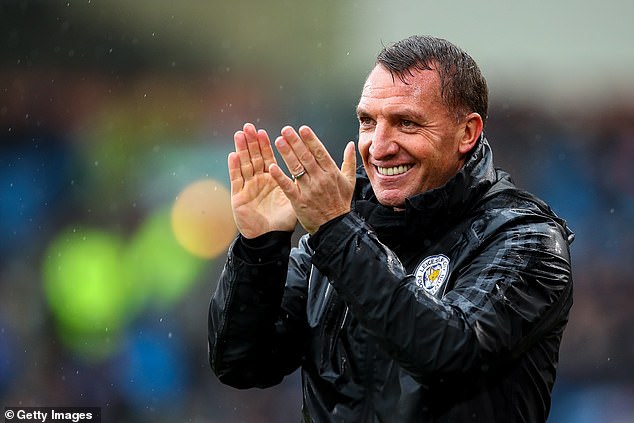 Leicester’s possession-based football will be easier to contain than the hit-and-run counter-attacking style of three years ago. And don’t bet against Brendan Rodgers — simply too ambitious not to covet a move to Arsenal at the end of this season — continuing to be linked with a move away. A distraction as the season draws on.

Guardiola’s introspection is innate. When he and Klopp both appeared at a Football Writers’ Association dinner in Manchester last month, the German enjoyed a beer and lingered late. Guardiola sipped water and left when the awards had been dispensed.

But on that cold night in Kharkiv, Guardiola responded jovially to the notion that he would not be averse to proving his worth by managing a less talented Ukrainian team. ‘Not a problem, not at all,’ he said. It was a classy, uplifting performance of the kind City need now. A football season is never lost by midwinter.