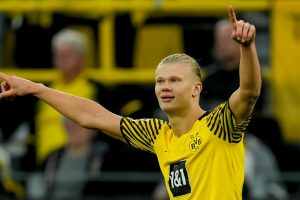 Legendary Manchester City striker Shaun Goater has vowed to convince Alf-Inge Haaland to get his son Erling to sign for the Premier League champions.

Goater and Alf-Inge played together at City for three years between 2000 and 2003, appearing alongside each other on 31 separate occasions.

Now the man affectionately nicknamed 'the Goat' by City fans has offered to help convince Haaland to join the club from Borussia Dortmund next summer.

The 21-year-old Norwegian is widely expected to move on from the Bundesliga side in the summer after two and a half years in Dortmund, where he has scored 68 goals in 67 appearances to date.

Speaking to The Sun, Goater said: “If they need me to talk to Alf, I’ll do what I can.

“He’d be an exceptional buy as he’s young, his scoring record in Europe is phenomenal and I think he’d adjust to the Premier League easily."

It is understood that he has a release clause in his contract valued at as low as £65million that becomes active at the end of the current season and Goater thinks this price is a bargain.

Should Erling Haaland join Manchester City next summer? Let us know in the comments section below.

“If you’re talking £65million, you are getting a really good deal," he added.

“He played against City in the Champions League last season and his pace was frightening. Wow.

“I hope City are strongly looking at him with Kane and Ronaldo in the past."

Pep Guardiola's side failed with their pursuits of Harry Kane and Cristiano Ronaldo in the summer as they looked to sign a striker to replace the departed Sergio Aguero.

Haaland is now believed to be at the top of Guardiola's wishlist ahead of the summer, although Goater also feels that Paris Saint-Germain's Kylian Mbappe who is out of contract next summer.

“Mbappe can play wide and up the middle. They would be great signings.”