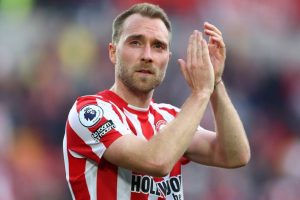 Christian Eriksen reportedly has ‘fears’ about making a sensational return to Tottenham this summer and could extend his stay at Brentford. The midfielder has starred for the Bees and helped them avoid relegation from the Premier League this season, and his return to form has seen him linked with moves to both Tottenham and Leicester.

However, Eriksen is giving serious thought to staying at Brentford next season, even though he has linked linked with moves to bigger clubs in the Premier League. Brentford gave Eriksen a chance when seemingly no one else would, but they may now be regretting their decision to only sign him on a six-month deal.

Following the dramatic events that occurred last summer which saw Eriksen suffer a cardiac arrest during Euro 2020, he was forced to take time away from football, and ultimately saw his contract terminated at Inter Milan. But after being passed fit, Brentford took a chance on Eriksen, and it’s been nothing but a success story.

When Eriksen joined Brentford they were struggling, and it was starting to look like they could be involved in a relegation battle. But his influence changed everything, and they went on a run of five-straight wins when he was named in the starting line-up.

His return from one of the most traumatic experiences possible has been an exceptional comeback story, and the world-class player that was winning the Serie A with Inter is now coached by Thomas Frank. And naturally, his former club Tottenham have expressed interest in re-signing him under Antonio Conte.

According to The Telegraph, Brentford are desperate to keep Eriksen at all costs, and the midfielder is not expected to decide his future until the summer. But sources have claimed that Eriksen has been looking at housing options in the affluent west London district of Chiswick, which is close to Brentford’s Community Stadium.

That would suggest that Eriksen is weighing up his options, and could stay at Brentford after they put their faith in the midfielder. But with Tottenham not too far away further north in London, a move back to Spurs hasn’t been ruled out either.

Conte managed Eriksen at Inter, and not that they knew it at the time, but both ended their stay at the club together at the end of last season, before Euro 2020 began. After Eriksen suffered a cardiac arrest, he was fitted with a special device that would help combat such an incident if it was to occur again.

Under Serie A rules, Eriksen could not continue to play for Inter, and his contract was terminated, but now a whole host of sides are looking to sign him. But Eriksen is now focusing on a special World Cup return with Denmark, as he said: “My goal is to play in the World Cup in Qatar.

“I want to play. That’s been my mindset all along. It’s a goal, a dream. Whether I’ll be picked is another thing. But it’s my dream to come back. I’m sure I can because I don’t feel any different. Physically, I’m back in top shape.”

As long as Eriksen stays fit, he will be there. And the midfielder has been crucial in the latter stages of Denmark’s qualifying campaign, as well as starring in their recent friendly matches.

But links to Tottenham have intensified after Conte sent the midfielder a classy message before Eriksen returned to face Spurs with Brentford, as he said: “I’m very happy to see him play football again. In June it was terrible, those images were terrible for everybody. We suffered a lot for him and his family.

“To see him for a game will be a pleasure for me. It’s incredible because not long ago happened what happened. To see him playing again makes me very happy because I know football is life. To have this opportunity is great for him and his family because now they come back to have a normal life.”

And Eriksen’s name was sung by the Tottenham fans, and perhaps it could be the fairytale return for the midfielder and for his loyal supporters. But for now, his focus is on Brentford, and Eriksen won’t forget what they have done for him.