Christian Eriksen: Football world comes together in support for Denmark player after collapse during match 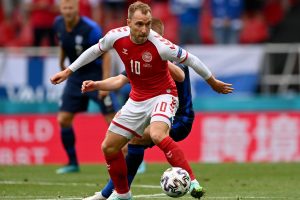 Football players and fans from around the world sent messages of support to Christian Eriksen after he collapsed on the pitch during the Denmark-Finland Euro2020 match.

Fabrice Muamba, who suffered a cardiac arrest while playing in an FA Cup game in 2012, was among those offering their thoughts and prayers on social media.

Eriksen’s current club Inter Milan and former clubs Tottenham and Ajax also issued messages of support, with Spurs tweeting: “All of our thoughts are with Christian Eriksen and his family.”

The Danish international midfielder dropped to the ground at the Parken Stadium shortly before half-time, leaving players from both teams visibly distressed.

He underwent prolonged treatment on the pitch before being taken away on a stretcher. It was later confirmed that he was awake and in a stable condition in hospital.

Former Spurs striker Gary Lineker, who was in the BBC studio to cover the match, tweeted: “Thank heavens. Some hope. Thoughts are with him and his family.”

Fans inside the stadium chanted “Christian Eriksen” before erupting in applause after the match was suspended.