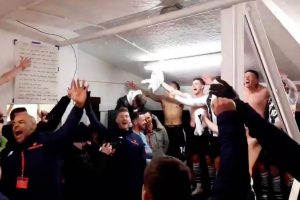 Non-League Chorley celebrated reaching the fourth round of the FA Cup by belting out Adele songs … and now they are rolling in the cash.

The National League North side saw off Derby County’s youngsters thanks to goals from Connor Hall and Mike Calveley and guarantee themselves a £500,000 pay day.

“For a team that was bottom of the National League after four games with zero points to be in the fourth round of the FA Cup is unreal,” said manager Jamie Vermiglio, a primary school head teacher.

With their fourth round tie certain to be in a prime time slot, Chorley will make half a million pounds – and a lot of memories.

For Vermiglio, one of those came before a 2-0 victory that never felt in doubt.

He said: “Credit to Wayne, I don’t know him personally but he phoned me two hours before the game and passed on his well wishes and apologised that he couldn’t be there. That was really humble of him.

“It was a surprise. I was wondering where Coleen was because the kids were shouting down his ear!”

The only worry for Vermiglio came in the night before the game when a generator broke down, cutting off the heat that was blowing under the pitch covers.

He explained: “I Face Timed the groundsman at 2am knowing he was staying here at the stadium and he wasn’t positive then.

“One of the heaters had blown and he was worried we wouldn’t get the game on.

“I woke up at 6am, FaceTimed him again and someone else answered the phone and showed him fast asleep in the middle of the pitch.

“The amount of effort to make sure the game has gone ahead is incredible.”

It was certainly worth it.

How far will Chorley go in the FA Cup? Have your say in the comments.