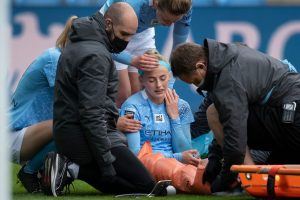 Chloe Kelly has fought back from the brink after recovering from a heartbreaking ACL injury that threatened her career.

After spending a year on the sidelines recovering from one of the most serious injuries an athlete can suffer, the 24-year-old has defied the odds to score the winner in the Euro 2022 final for England at Wembley against Germany. It is the stuff players can only dream about while Kelly will go down as an England legend forever.

It was her goal and her iconic celebration that handed the Lionesses their first international trophy – and the first European Championship for both the men and women. But it could have been all very different had she not fought hard in her recovery last year.

In May 2021, Kelly suffered an anterior cruciate ligament injury – a potentially career-ending injury that takes at least 12 months to recover from. It meant that the Manchester City star was always in a race against time to even be fit for the Euros this summer, let alone be named in the squad.

It was the injury that forced Kelly to miss the Olympics in Tokyo last year, a feeling that left her gut-wrenched as she watched her pals reach the quarter-finals from home. But her reaction to the injury itself is a testament to her character where many would have wilted, she stuck at it.

She said at the time: "Why does everyone fear it so much? Why is it when someone has done their ACL, there's just negativity that goes with it? We put nine to 12 months on it as soon as it comes.

"I think the negativity around ACL's, more than the research, is something that I would like changing. You're putting everything into it just like another injury. Going through rehabilitation when there is so much noise around how bad it is, probably makes it worse. Any injury is difficult."

Against all odds, Kelly managed to find herself in the right place at the right time when Germany failed to clear a corner 10 minutes from full-time in extra-time. Kelly got whatever she could on the ball, brushing it into the net to score her first international goal in the process.

It led to a moment of uncertainty as the Ealing-born star looked over concerned that the goal could be ruled out. But with no flag forthcoming from the lineswoman, there was quite the reaction as Kelly ripped her top off and swung it around her head while the final whistle came soon after, sparking further wild celebrations.