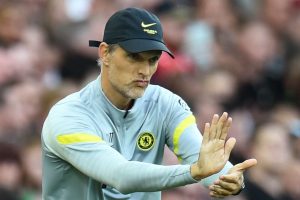 If Thomas Tuchel was manager of Manchester United, they would win the league.

He is that good. And he can show it again when Chelsea take on Manchester City this weekend.

United are not going to win the league this season, in my opinion. But if they had a manager like Tuchel it would be different.

He sees the game. What he did last Sunday was a masterstroke, taking off Mason Mount and putting on N’Golo Kante.

You’ve got to remember, Mount is one of Chelsea’s go-to players, one of their best players. But he brought him off and they literally ripped Tottenham to shreds. If that had been a boxing match you would have had to stop it because it was getting dangerous.

Other managers just stick their best 11 players on the pitch and say: “Go and do what you want…”

It was a big deal bringing Mount off. How many other managers would have been brave enough to do that?

Do you think Chelsea will win the Premier League this season? Let us know in the comments section below. But Tuchel doesn’t really care who he upsets. He has a huge squad of players and they can’t play every week. But he has enough games to keep everybody happy.

It’s harder for English players because they want to play every week. Foreign players are more used to squad rotation.

So Tuchel has another big call to make against City. That Chelsea midfield was unbelievable when Mount came off.

I’m Mason Mount's biggest fan. I think he’s outstanding, one of the best players in England. But he looks tired at the moment. Last Sunday against Tottenham they broke forward and his pass to Romelu Lukaku was a tired pass.

His passing is usually always crisp. He always makes the right decision. I just thought he looked tired. Will he get rested for this game?

I think you need as much pace as possible in your team against City. Put Timo Werner in there and I don’t think City cope with the pace of him and Lukaku.

I think this is a big game for City. You’re looking at their start thinking: “Why didn’t you pay the money for Harry Kane?” In two of the first five games they’ve failed to score a goal! You wouldn’t think that was possible with City. They didn’t even look like scoring against Southampton.

If Chelsea win they would be six point clear of City and that’s a worry even this early in the season. Chelsea aren’t going to lose many games. Chelsea and City are the two best teams in the league in terms of squad strength.

If you told me Liverpool’s best XI would play all season they would 100 per cent be in the title race. But they’re a couple of injuries away from fighting for top four.

If you said Chelsea and City would miss a couple of key players to injury, they’re still getting in the top four. Arsenal could still finish above Tottenham this season.

The secret to the turnaround is the games they’ve been playing – they’re not playing Manchester City and Chelsea, that’s what it is!

Everybody loves a winning team. All you want to see is attitude, hard work and being hard to beat. It wasn’t there against City. They capitulated.

But now they’ve got their players fit, won three on the trot. Going into this game, one team is flying and the other one is going backwards. This is a huge match for both teams. For many years the North London Derby fizzled out because of the standard Arsenal got to.

Chelsea, Manchester United, Liverpool. They were all bigger matches for Arsenal when they were good.

But this is now their biggest match of the season again. The players have to win this football match.

You’re not going to win the league so you have to beat your arch-enemies to give you a chance with the fans. Next season is going to be a nightmare for players but scrapping the League Cup to ease the congestion would still be a terrible idea.

I played for about 20 years. I won virtually everything except the European Cup.

One of the biggest highlights of my career was scoring a goal in the League Cup final at Wembley.

That tells you everything. If they scrapped it, you could be taking away the highlight of someone else’s career.

People criticise it as a consolation cup. But every player sits down to watch the final and thinks: “I wish I was playing in that today.”

Don’t scrap it. For some teams, with the top four so dominant, you’re down to competing for two trophies a year – and that’s one of them.

At least you have that hope. Teams like Southampton, Crystal Palace, Everton. To scrap it would deprive certain clubs of that hope.

And you’re taking away a dream from the players. A dream of something that might never happen in their lives again.