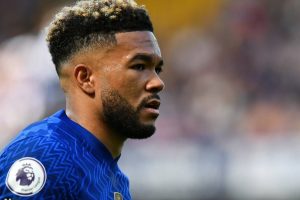 Who could replace Lukaku at Chelsea?

Reece James is reportedly aware that he is underpaid at Chelsea with the star pocketing just £70,000-a-week, and interest is being shown from elsewhere. Chelsea have already suffered from poor contractual dealings this summer, and they’re playing a dangerous game with James.

James is yet to have his contract renewed at Chelsea, despite his role in the team vastly changing since he signed his previous deal.

During Frank Lampard’s tenure, multiple stars were offered new deals and James was one of those, signing on the dotted line to receive £70,000-a-week. But since then he has become a key part of Thomas Tuchel’s side.

According to The Athletic, James is aware that he is underpaid when assessing the role he plays in the team, and the new owners should prioritise a new deal to scupper interest. But Chelsea are playing a dangerous game as the star still has three years left on his current deal, which is holding them back from offering a new one.

Chelsea have already lost Antonio Rudiger and Andreas Christensen this summer on free deals, with Cesar Azpilicueta set to follow. But if they aren’t careful, they could be hit again in the future with James.

James isn’t just one of the key defenders, the England star is one of the main members of Tuchel’s side, providing so much threat down the right-flank. Compared to some of his team-mates, he is paid very little when considering the impact he has on results.

Both Real Madrid and Manchester City have shown interest in the star, with the Spanish giants looking to secure a replacement for Dani Carvajal, and Pep Guardiola seeing James as the ideal long-term solution for when Kyle Walker begins to decline. But according to the Daily Mail, Chelsea are calm over contract negotiations due to the amount of time left on his deal.

The report suggests that due to the fact James loves Chelsea, and because he has three years left on his deal, it negates the need to offer a new contract. Since James was thrown into the deep end by Lampard, he has gone on to rack-up 123 games for the club.

And James’ versatility has also been a huge asset to Tuchel, as he can play anywhere across his back-line. James has played in both wing-back positions for Chelsea and England, and even played as part of a back three for the Blues.

“He can play both positions brilliantly, but we can only select him once,” Tuchel explained in April. “I think that the back three is a little bit less demanding physically in comparison to the wing-back position.

“This is anyway the next step, how many games can he play as a wing-back? If he plays wing-back during a season, [can he be] reliable on a level where he’s decisive? It’s a bit less demanding physically in the back three in terms of accelerations, long accelerations and high speed.

“That helps us to have him on the pitch for more minutes, and that’s why he plays in there. So we need to decide.” Chelsea may be blessed with the options for now, but they should reward James in order to continue the success into the long-term future.