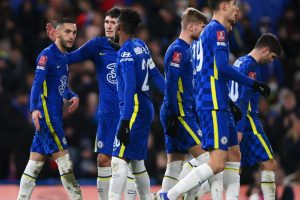 In 1991, Chelsea fans would not have been able to Google their humiliating third round exit to Oxford United in the FA Cup.

That’s because the infamous internet search engine was not even on our screens the last time the Blues failed to progress into the fourth round of the old competition.

Fast forward to the present day, and Chelsea supporters were able to tweet, read, and, of course, google their 5-1 victory over Chesterfield.

Goals from Timo Werner, Callum Hudson-Odoi, Romelu Lukaku, Andreas Christensen, and Hakim Ziyech put Thomas Tuchel’s side in the driving seat, before Chesterfield forward Akwasi Asante gave the 5,000 traveling fans something to remember when he tapped home an unlikely goal from close range.

And their comfortable victory over the non-league side meant the Blues have successfully progressed into the fourth round of the old competition for the 24th time in a row.

The aforementioned Oxford United were the last side to knock the Blues out at the third round in 1991.

Chelsea were stunned by the U’s at Stamford Bridge after goals from Oxford’s Lee Nogan and John Durning put the away side in a commanding position.

Blues legend Kerry Dixon forced a tense finish when he halved the deficit, but his effort was all for nothing as Northern Irish star Jim Magilton put the contest to bed to seal a 3-1 away victory.

HAVE YOUR SAY! Can Thomas Tuchel and Chelsea win the FA Cup this season? Comment below

That famous encounter is still revered by Oxford United fans today, who are currently enjoying a strong push for promotion to the Championship.

Meanwhile, the Blues have garnered plenty of success in the FA Cup since that shocking night at Stamford Bridge.

The west Londoners are hugely fond of the infamous old trophy, having won the competition on eight occasions and reaching four of the last finals.

And Tuchel ensured the Blues’ exemplary record of progressing into the fourth round remained, by naming a strong side to face Chesterfield.

While he handed debuts to Marcus Bettinelli and Lewis Hall, the Chelsea squad was still full of quality and experience.

The Blues have lost two consecutive FA Cup finals in two seasons, finishing as runner-up to Leicester City last season, and losing to fierce rivals Arsenal in the 2020 final.