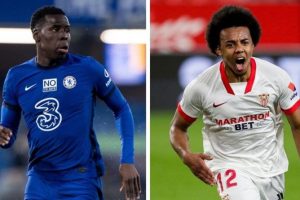 West Ham have reportedly made a bid for Chelsea defender Kurt Zouma – which could affect the Blues’ approach for Jules Kounde. Thomas Tuchel has made an approach to sign Kounde and wants to include Zouma in the deal – something the 26-year-old isn’t necessarily keen on.

Kounde has admitted he could leave Sevilla this summer, with Chelsea ready to pounce.

“Regarding my future, it’s certain that I will perhaps have to change clubs this summer,” Kounde said.

“My goal is to play for a big club, to try to always progress and to win trophies. It’s true that I might have to move, but that’s not relevant today.”

Zouma may stop those plans, however, with reports that, rather than a move to Sevilla, he would prefer to go to West Ham.

And journalist Rudy Galetti says that the Hammers are set to make a move for the French defender and are preparing a £20million bid.

Zouma was a regular for Frank Lampard at the start of last season, starting all but two of the opening 16 league matches.

However, he started just seven Premier League games under Tuchel and the German boss seems to be happy to let him leave this summer.

West Ham agreeing a fee with Chelsea could be the only stumbling block in negotiations, with Zouma preferring to stay in London than move to Seville.

And the Chelsea defender might not be the only player who has a transfer preference this summer.

Speaking on the Transfer Window podcast, Duncan Castles says Kounde would prefer to join Real Madrid in this window.

Real are said to be interested in signing the Frenchman but are currently prioritising a deal for PSG’s Kylian Mbappe – Kounde’s international teammate.

Castles said: “Kounde’s preference should he leave Sevilla, and he’s talked about leaving this summer and being open to a move, would be Real Madrid.

“But Madrid at present are not in a frame of mind to take Kounde from Sevilla.

“Florentino Perez, his central focus, overriding focus, is on getting Kylian Mbappe from Paris Saint-Germain.

“He still thinks there is a possibility of doing it this summer.”

Mbappe’s future is in the balance, with his contract expiring at the end of next season, and his movements this summer could depend on whether Chelsea land Kounde.

They have been linked with numerous other defenders this summer, but the Sevilla man seems to be their No 1 target.