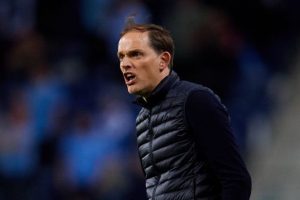 Thomas Tuchel plans to lead Chelsea to Premier League title success next season by securing a few upgrades in an expensive summer transfer window. Erling Haaland and Declan Rice have both been linked with moves that could cost a combined £250million, but those deals both seem unlikely to happen this year. Express Sport picks a Blues XI with a couple of alternative options.

Mendy has been Tuchel’s No 1 goalkeeper since the German replaced Frank Lampard in January.

Kepa Arrizabalaga, once an exciting £70m arrival, is firmly the second choice at Stamford Bridge, despite earning a few starts towards the end of last season.

The 28-year-old Mendy started the campaign well after arriving from Rennes before enduring a shaky period of form.

But he had an excellent end, including winning the Champions League, and deserves to start the season.

JUST IN: Arsenal must listen to Ray Parlour advice and complete three signings

Tuchel frequently used a back three with wing backs in his opening five months in charge and has also deployed the system in pre-season, meaning that it is certain that it is the shape that will start the season.

Cesar Azpilicueta will surely begin on the right of the back three, although Tuchel reportedly has long-term plans to move Reece James into the position.

Silva was excellent when fit for Chelsea and should start in the middle, although the other centre-back position in slightly more contentious.

Danish defender Christensen has improved immensely over the last few years and could keep Antonio Rudiger waiting in reserve.

The 21-year-old is an excellent defender and contributes effectively when attacking, meaning he is perfect for the role.

Over time, James could transition into a more central role and be Azpilicueta’s long-term successor.

On the other side, Chilwell will likely begin the season ahead of Marcos Alonso, despite the Spaniard being brought back into the frame having been banished by Lampard.

West Ham are reportedly demanding around £80m for Chelsea transfer target Rice, which could mean that Chelsea look for alternatives.

The Athletic reported on Monday that the West Londoners could instead try to sign Tchouameni from Monaco.

France U21 starlet Tchouameni has formed an excellent midfield partnership with former Chelsea man Cesc Fabregas and could form a similar relationship with either Jorginho or Kante at Stamford Bridge.

Jorginho’s impressive form under Tuchel and then for Italy in their Euro 2020-winning summer has prompted suggestions that he may depart the club before the start of the season.

Kante is almost undroppable and is the likelier of the pair to begin the Palace fixture in midfield.

Tuchel could, and probably will, start the season with Timo Werner leading his front line, and not Haaland.

But imagine if Werner was dropped for possible Haaland alternative Ings instead?

Ings has entered the final 12 months of his contract at Southampton and looks unlikely to agree fresh terms.

The Saints were demanding around £30m for the England international last summer but might now accept less rather than lose him for free next summer.

Whoever starts up front will likely be supported by Mount and Havertz, who combined to defeat Manchester City in May’s Champions League final.
Source: Read Full Article