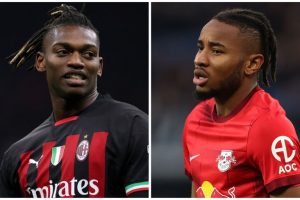 Chelsea are already lining up their next transfer for the summer of 2023 after agreeing a deal with RB Leipzig to sign Christopher Nkunku, according to reports. The Blues are preparing to revamp their frontline as Graham Potter makes his mark at Stamford Bridge and, as well as signing Nkunku in a big-money deal, AC Milan attacker Rafael Leao remains on their radar.

The club have already found an agreement on personal terms with Nkunku, who is poised to sign a six-year contract when the deal goes through. The 24-year-old underwent a medical in Frankfurt in late August, which was arranged by Chelsea’s club doctor as they opened negotiations with Leipzig. And reports say Leao is next on Boehly’s list as a marquee signing.

It was made clear to the west London club that Leipzig were not willing part ways with Nkunku so close to the transfer deadline, and the French striker penned a one-year extension on the premise he would be allowed to leave in 2023.

But with a release clause in his contract allowing him to leave for £60m next summer, Chelsea have moved to complete a deal with the German side, which is expected to be worth around £61m (€70m). That only represents a slight increase on his release clause, but allows Leipzig to gain a bigger share of the fee.

With the deal expected to be announced before the end of the season in a similar method to how Timo Werner’s transfer was announced in 2020, Nkunku will link up with his new side when the Bundesliga campaign finishes.

The former PSG academy graduate has scored 14 goals in all competitions this season, having found the net 35 times in 2021-22, and has been tracked by his former club and Real Madrid. He is currently recovering from an injury after being ruled out of the World Cup with France.

Once the deal has been concluded, Boehly and his newly-assembled recruitment team of Paul Winstanley, Christopher Vivell, Joe Shields and Lawrence Stewart will begin working on a deal for Leao after failing to convince AC Milan to sell him over the summer, according to 90Min.

The Portuguese winger was named Serie A’s MVP for last season as the Rossoneri won the Scudetto, scoring 11 goals and assisting eight for the Italian giants.

He is rated in the region of £130m by the Milanese outfit after director Paolo Maldini confirmed they had snubbed an approach for their star attacker, but his contract situation could hand Chelsea the chance to snap him up for a much lower fee.

Leao’s current deal expires in 2024 and, with no agreement for an extension on the horizon, it remains possible Milan could cash in on the Portugal international, who is at the World Cup in Qatar.