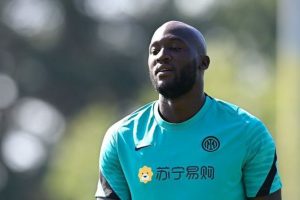 Chelsea sealed the £97.5million signing of Romelu Lukaku from Inter Milan to finally end Thomas Tuchel’s search for a world-class striker. The Blues opted to bring the Belgian back to the club in a club-record deal on Thursday, with Lukaku signing a long-term contract.

The 28-year-old joins the Blues on the back of a fine season in Italy, having scored 24 goals in the Serie A.

The Nerazzurri claimed their first Scudetto in a decade under Antonio Conte, knocking Juventus off the top of Italian football in the process.

Lukaku played a key role in that title success and in joining in the Champions League winners, the striker will have his sights set on more success at Stamford Bridge.

Tuchel identified his side’s need for a new striker this summer after watching his attackers struggle in front of goal.

Timo Werner struck only six goals in his debut campaign in the Premier League, a figure that was matched by Tammy Abraham but the 23-year-old later fell out of favour.

The fact Jorginho ended up on top of the goalscoring list with seven goals in the league, all of which were from the penalty spot, pointed to a growing problem.

Tuchel will feel he has solved that with the addition of Lukaku to his squad, a player who described as a “true No.9” before the club captured the frontman.

Manchester United legend Roy Keane admitted this week that with Lukaku, Chelsea will be the main challengers to Manchester City for the title.

“You were looking at the last year or two going without that out and out goalscorer. But Lukaku, gives them a great chance,” he told The Overlap.

“I know Liverpool have a lot of players coming back, but I would still be looking at City and Chelsea.

That is despite the fact that Man United have signed Jadon Sancho and are only a confirmation away from announcing Raphael Varane’s arrival.

The arrival of centre-back Ibrahima Konate from RB Leipzig should prevent such issues from occurring again.

But their lack of signings following their title success in 2020 shows just how Chelsea have learned from their rivals’ mistakes.

Some clubs have the temptation to stand still when they manage to win titles and trophies.

But instead of being satisfied with his squad, the perfectionist Tuchel has drawn from his own experience at Paris Saint-Germain, when the French champions rested on their laurels.

Winning the Champions League is not enough for the 47-year-old and he has challenged his players to find more motivation to challenge for their first league title since 2017.

Signing Lukaku sends out a title warning to their rivals, while Man City’s signing of Jack Grealish somehow improves an already star-studded squad bursting with talent.

Reds legend Jamie Carragher had warned his club of the danger they were heading into if they did not bolster their attacking options.

Speaking in September 2020, he told The Evening Standard: “The front three are as good as anyone in Europe but whenever one of them is out, there is a massive drop off.

“Divock Origi is a legend for Liverpool as he’s scored big goals at big moments but doesn’t have quite the quality. Is Minamino part of the front three? Not for me.

“The front three are very robust and don’t miss many games but if Liverpool were to lose one of them, especially the two wide players, for a lengthy amount of time they could have a real problem next season.”

By September, Chelsea had splashed out £220m on new players, while Man City brought in central defender Ruben Dias, widely regarded as the key cog in their title triumph.

And by the time Jurgen Klopp had decided to dip into the market to sign Diogo Jota and Thiago Alcantara, it was almost too late.

A year on from making those comments, Liverpool remain in the same boat. They are yet to make any more attacking additions.

Divock Origi has not been offloaded, while Takumi Minamino would struggle to make a matchday squad at present.

But Chelsea fans can relax with the knowledge that the arrival of Lukaku will strengthen a squad filled with winners.

And with that, the west London outfit should be equipped to run Man City and their other title rivals close when May 2022 rolls around.