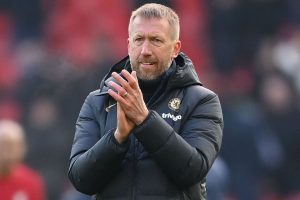 Big-spending Chelsea still want to complete four more January transfer signings with the kings of hijacking moves reportedly ready to gazump three of their Premier League rivals. The Blues have already completed a £200m outlay of six new arrivals this month but remain active in the market as they continue to strengthen Graham Potter’s squad.

Anthony Gordon, Moises Caicedo, Enzo Fernandez and Pedro Porro remain targets in the final week of the window. At least three of those pursuits involve a tough battle with a top-flight rival.

Gordon has been strongly linked with a £40million switch to Newcastle from crisis club Everton. Arsenal – who pulled out of the Mudryk tussle with Chelsea – have apparently entered the race to sign Brighton starlet Moises Caicedo.

Chelsea will also compete with London rivals Tottenham for the signing of the former Manchester City wing-back Pedro Porro from Sporting Lisbon. The west Londoners are expected to be one of the busiest clubs in the remainder of the window with all four players targeted, according to the Evening Standard.

It comes with Chelsea prepared to step on toes to get their top targets. Arsenal were beaten to the signing of Mudryk, while the Gunners and Manchester United found themselves left behind in the race for Felix.

Potter had played down speculation that there would be many more signings after his side’s goalless draw with Liverpool on Sunday. But it now seems as though his team – who are 10th in the Premier League – will be strengthened.

The Chelsea boss said: “You’ve got to analyse the squad and analyse where it’s at. Sometimes it is adding and sometimes it’s moving out players. That is on a case-by-case basis and we’ll look at it as and when.”

He added: “I don’t think there’s going to be too many [new signings] to be honest. I’ve got no complaints about the squad. The January window is very complex.”

Chelsea will need to raise funds to balance their monstrous spending. Winger Christian Pulisic has been linked with a move away after falling further down the pecking order following the arrivals of Mudryk and Madueke.

The Blues are also trying to tie down Mason Mount to a new contract. The England midfielder has just 18 months remaining on his current terms and has interest from Liverpool.