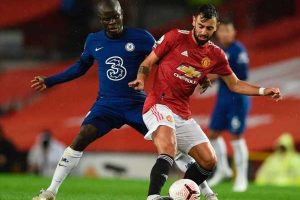 Manchester United travel to London to face Chelsea in the Premier League on Sunday afternoon.

The Red Devils will feel confident in claiming all three points, as Chelsea have failed to score in their last three matches against United.

Blues manager Thomas Tuchel will hope that his side’s gutsy win in Madrid over the La Liga leaders Atletico can provide the club with the inspiration needed to topple United.

Ole Gunnar Solskjaer’s team ensured they progressed to the last 16 of the Europa League with a goalless draw at Old Trafford cementing a 4-0 win on aggregate over Real Sociedad.

Here is everything you need to know:

The fixture will kick-off at 4:30pm at Stamford Bridge.

The match is live on Sky Sports Premier League and Main Event, with coverage starting from 4pm.

Thiago Silva is Chelsea’s only injury concern ahead of the visit of Manchester United, as the Brazilian defender has been out with a thigh problem.

Edinson Cavani, Donny van de Beek and Scott McTominay could all return forUnited. Cavani and van de Beek have missed the past three matches due to muscle issues, while McTominay was withdrawn during their win at Sociedad. Daniel James will also be assessed, but Juan Mata, Paul Pogba and Phil Jones are out.

Both sides will be desperate for all three points, and Chelsea’s lack of a cutting edge combined with Manchester United’s ability to concede out of nothing could make for an entertaining watch – but I can’t split the two sides. 1-1 draw.