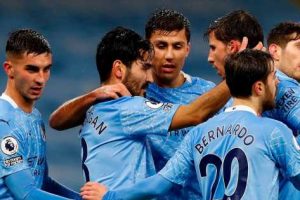 Chelsea vs Manchester City will go ahead – despite the away side confirming another positive Covid-19 test.

Pep Guardiola's side are playing their first Premier League game since Boxing Day after their game against Everton was postponed when seven players tested positive for the disease.

Having only returned to training the day before New Year's Eve, they are looking to climb up the table with a win at Stamford Bridge.

But the club have confirmed that defender Eric Garcia, who has made just seven appearances for City this season, will not be part of the game in London.

A statement on the club website reads: "Manchester City FC can confirm that Eric Garcia and one member of staff have tested positive for COVID-19.

"Both personnel will now observe a period of self-isolation in accordance with Premier League and UK Government protocol on quarantine.

"Everyone at the Club wishes our colleagues a speedy recovery ahead of their return to work, training and competition."

Mendy hosted a chef and two friends of his partner at his property, in breach of government guidelines preventing people from mixing indoors.

Mendy's girlfriend, niece and nephew were also allegedly all in attendance – but as they are part of the City defender's Cheshire's household, they were permitted to be there.

A spokesperson for Mendy told The Sun: "Benjamin and his partner allowed a chef and two friends of his partner to attend his property for a dinner party on New Years Eve.

"Ben accepts that this is a breach of COVID-19 protocols and is sorry for his actions in this matter."Ben has had a Covid test and is liaising with Manchester City about this."

A Manchester City spokesman also said: "The club is aware of a New Year's Eve covid-19 breach involving Benjamin Mendy and the subsequent media reporting of it.

"While it is understood that elements of this incident have been misinterpreted in the reports, and that the player has publicly apologised for his error, the club is disappointed to learn of the transgression and will be conducting an internal investigation."