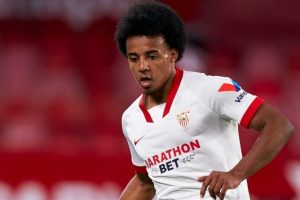 Chelsea are still interested in signing Sevilla’s Jules Kounde this summer as speculation continues to link the defender with a move to Stamford Bridge. Thomas Tuchel has made two signings this summer and is looking for another signing to complete his squad ahead of the August 31 deadline.

The German has already splashed out £97.5million on landing top target Romelu Lukaku from Inter Milan.

The Blues broke their transfer record to get that deal done and they would have to do something similar to capture Kounde.

The 22-year-old has emerged as one of LaLiga’s top defenders since arriving from Bordeaux two years ago.

Kounde was part of France’s squad for Euro 2020 after a standout season for Julen Lopetegui’s side, attracting interest from Chelsea and Manchester United.

But after the Red Devils struck a deal to bring Raphael Varane from Real Madrid, Chelsea were left in pole position to negotiate a deal for Kounde.

Their record fee spent on a defender is the £50m paid to Leicester to sign Ben Chilwell in September 2020.

But with Kounde’s release clause standing at £68m, it could take a record fee to convince the Spanish side to part with their prized asset.

There is no urgent need from Sevilla’s point of view to sell, as reflected by their decision to reject a £30m offer which would have seen Kurt Zouma head in the opposite direction.

According to Sky Sports News reporter Kaveh Solkehol, Chelsea remain in the hunt to sign Kounde, with separate reports claiming the club are attempting to sell Zouma to West Ham to fund the deal.

But while they are prioritising the transfer after clinching the signing of Lukaku, the report adds there is no “emergency need” for a new defender.

It is believed that they are prepared to wait until their desire to add a defender to the squad becomes more pressing.

And that could mean waiting until 2022, when two of their most consistent performers at the back are out of contract.

Tuchel, who himself signed a new two-year deal in June on improved terms after guiding Chelsea to the Champions League last season, has a luxury options to choose from.

The 47-year-old kept his traditional back three for the opening game of the season, a 3-0 win over Crystal Palace, with Antonio Rudiger, Andreas Christensena and Trevoh Chalobah making up the centre-backs.

Capitain Cesar Azpilicueta was only named as a substitute along with Zouma and Thiago Silva.

Even full-back Reece James was used as a makeshift right-sided centre-back at times last season, highlighting the options Tuchel has available to him.

The emergence of Chalobah in recent week is another factor that has caused Chelsea to hit the brakes on their pursuit of Kounde.

The 22-year-old made his long-awaited Premier League debut after loans with Huddersfield Town and Lorient in recent times.

Chalobah has impressed Tuchel with a number of solid displays in pre-season and was a shock starter for their UEFA Super Cup penalty shootout win over Villarreal.

Despite playing the entire 120 minutes, the highly-rated youngster was retained for their Premier League curtain raiser.

And the towering defender made his case with another exceptional display, thundering home a superb 25-yard effort to seal the three points.

Additionally, Silva signed a one-year extension to his contract in June after an impressive debut campaign in the Premier League.

There are doubts over Rudiger’s long-term future, despite the German turning around his career at Stamford Bridge after being frozen out under Frank Lampard.

The 28-year-old’s contract expires next summer and talks are yet to render an agreement to extend, but the Blues are confident of tying up the deal.

Should Rudiger make clear his desire for a new challenge after four years in London, that would be enough to make signing Kounde a major priority in 2022.

But for now, it appears the German tactician is content with his squad.