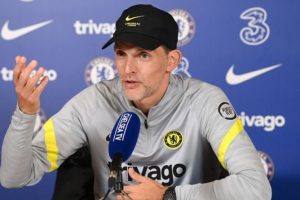 Chelsea will open their Champions League account against Zenit on Tuesday, four months after new boss Thomas Tuchel romped all the way to the trophy by beating Manchester City in the final. Both clubs are unbeaten in their respective leagues, while they have never met in competitive action before, making their European curtain-raiser even more intriguing. The Blues must navigate the absences of both N’Golo Kante and Christian Pulisic, but they still have plenty of talent to choose from. Express Sport looks at how they are likely to line up at Stamford Bridge.

Talk about a late bloomer. Edouard Mendy was playing in the French fifth tier in his early-twenties, and only ascended to the dizzying heights of Ligue 1 by the age of 26.

Two years later, he arrived in west London to save Chelsea from the shambolic Kepa Arrizabalaga, proving himself not only to be a capable stop-gap, but a game-changer between the sticks.

His heroics were once again on display against Aston Villa, with key moments at either end ensuring the Blues left with a flattering 3-0 victory.

JUST IN: Liverpool physio who put Harvey Elliott’s ankle back in place speaks out on ‘rare’ injury

The more attacking wing-back options of Reece James and Marcos Alonso could be on display against Zenit, given the gulf in class between the squads.

Thiago Silva was also fantastic against Villa and is available after last week’s controversial FIFA suspension was overturned, but he may be rested for a crunch tie with Tottenham next weekend.

Andreas Christensen has grown into his role in the centre of defence, earning the trust of Tuchel along the way, while Cesar Azpilicueta and Antonio Rudiger should make up the rest of the quintet.

Among a hugely competitive crop of midfielders, Saul Niguez had a debut to forget against Villa, while Mateo Kovacic stated a convincing case to the Chelsea boss.

The metronomic Jorginho, crowned as UEFA’s Men’s Player of the Season for his exploits last term, is also likely to get the nod.

As for N’Golo Kante, Tuchel confirmed that Tuesday’s tie will come ‘a bit too early’ as an ankle injury continues to hamper the start of his season.

Romelu Lukaku’s return to English football has been as emphatic as his spell at Inter Milan suggested it would be.

The Belgian scored two sensational goals against Villa to help Chelsea to victory, while Kai Havertz has also appeared in every Premier League game so far this campaign.

Christian Pulisic is ruled out of the tie with an ankle injury he sustained while on international duty with the USA, so fan-favourite Mason Mount could also feature in a formidable front-three.