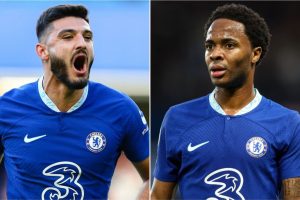 Chelsea may already have the perfect alternative to splashing out on Cristiano Ronaldo in the January transfer window. If Graham Potter is looking for some extra spice in his attacking ranks, Raheem Sterling believes that Armando Broja is set for a bright future after wildly claiming that he could be the fastest footballer in the world.

The Blues were linked with Ronaldo during the summer but Thomas Tuchel was reportedly against the idea of swooping for the Man Utd forward. The possibility is expected to arise again in January, particularly now that Tuchel has made way, after the Portuguese lashed out at United in an interview with Piers Morgan.

Many expect Ronaldo’s contract to be terminated before leaving Old Trafford in January, but his wages will still make big clubs think twice about pulling the trigger, even if he can be brought in on a free transfer.

Sterling has given Potter and co-owner Todd Boehly another reason to think again before pursuing Ronaldo as he showered Broja with huge praise.

JUST IN: World Cup LIVE: Lionel Messi gears up for awkward meeting, FIFA ‘let themselves down’

JUST IN: World Cup LIVE: Lionel Messi gears up for awkward meeting, FIFA ‘let themselves down’

When Sterling was asked whether he is the quickest player at Chelsea, he told UMM: “No, it’s Armando Broja. He’s the fastest man in the world. When people see him properly… yeah. I can’t lie, I’ve been telling my friends outside the club that he’s the next one. It’s him. I’ve heard a lot of things about him without ever really watching him. But he’s the truth.”

The 21-year-old striker spent last season on loan at Southampton and he’s had to settle for a spot on the fringes this term. However, Chelsea batted away bids from West Ham and an inquiry from Real Madrid during the summer before tying him down to a long-term contract, which shows how highly he is rated at Stamford Bridge.

Broja has been left to feed off scraps in terms of game time this season, starting just two games in the Premier League and scoring once. Regular appearances from the bench could eventually turn into starts, however, as he banks more experience and Pierre-Emerick Aubameyang creeps towards his 34th birthday.

At an explosive 6ft 3in tall, lightning-quick Broja has been likened to Manchester City frontman Erling Haaland. The Chelsea youngster is already a regular goalscorer at international level with Albania, and even though he’s yet to replicate that with the Blues, many feel as though it is simply a matter of time.

“From last year to this he has grown a lot, and at Southampton, he exploded,” Albania assistant manager Sergio Porrini told TMW back in May. “His greatest qualities are in progression, especially the ball and chain.

“[He’s] less good, on the other hand, with his back to the goal, in the construction of the action. But, in the spaces, he is devastating.” Broja will get the opportunity to rest and recover over the next few weeks as Albania failed to make it to the World Cup, with Chelsea back on December 27 against Bournemouth.