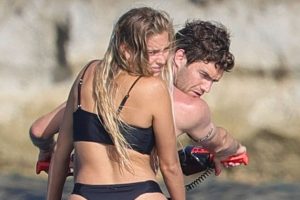 Chelsea star Marcos Alonso is spending his holidays on a yacht in Ibiza where he's been joined by the "Italian Megan Fox".

Alonso's summer officially began this week after he finished up on international duty with Spain. The left-back didn't have far to travel as he headed straight for the Balearic Islands after the 2-0 home win against Czech Republic last Sunday (June 12).

He linked up with a posse of his pals who he has been enjoying some down time with, including Miss Italia 2019 Carolina Stramare. SHe has earnt her nickname as she looks similar to American actress Fox.

The model, who also works as a football TV presenter in her home country, has over 400k Instagram followers – and Alonso isn't the first ex-Fiorentina player she's spent time with.

Earlier this year it was claimed she was dating Juventus striker Dusan Vlahovic. It seems nothing has come of that, though, with Alonso now enjoying her company.

Where would you holiday if you were a footballer? Let us know in the comments section below

But it wasn't her who he was getting close to. An unknown blonde joined him for a ride on one of the boat's jet-skis, while they also had fun together bouncing along on a giant rubber ring.

Alonso may not currently have a care in the world, but he's facing some important decisions when he returns to Chelsea for pre-season later this month.

Reports have claimed he wants to quit Stamford Bridge and join Barcelona, who are already set to sign his former team-mate Andreas Christensen and have also been linked with Cesar Azpilicueta.

There's only one year left on his contract with the Blues, so it makes financial sense for them to cash in now rather than lose him for free next year.