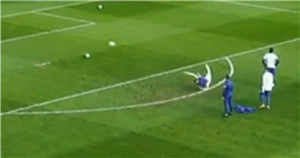 Chelsea star Olivier Giroud has kicked off his TikTok account with a bang after posting an outrageous goal.

The Frenchman's future has been discussed at length this year with his contract expiring at the end of the season.

Giroud has struggled for game-time this campaign, initially under Frank Lampard before Thomas Tuchel adopted a similar policy.

But the striker has other things on his mind with the launch of his new social media channel on popular app TikTok.

In a conversation with Chelsea's official Twitter account, he tweeted: "Hey @chelseafc admin can you send me a video of that goal I scored at Cobham last week? I want to share it. Thanks!"

Chelsea replied: "Check your DMs, we’ll send it over. You know where we think it would look really good though…"

It did not take long for fans to find out what the France international was referring to and had treated them to a delightful goal.

In his TikTok bio, Giroud has written: "Well done, you've found me, welcome on my TikTok."

There is a single video posted to the channel, a stunning goal from Chelsea training.

In the post, there is a welcome message with the ex-Arsenal star saying: “Congrats! You’ve found me. Here’s a gift for you…”

The clip shows the forward scoring a jaw-dropping scorpion kick from 20 yards out.

"Not bad for a first post, right?" Giroud adds. "Welcome to my official TikTok channel… subscribe because we will share a lot of things this summer."

Despite his lack of game-time, Giroud has been called up to the France squad ahead of Euro 2020 this summer.

The 34-year-old, who was an unused substitute in the Champions League final against Manchester City, has been a key part of Didier Deschamps' side.