Chelsea sell youngster Livramento to Southampton but include buy-back clause 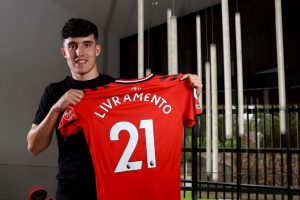 The teenager was set to join Brighton, before the Saints hijacked the deal.

The 18-year-old joins on a five-year deal after being awarded Academy Player of the Year, following an impressive season with the Blues Under-23 side that saw them finish second in Premier League 2.

Aston Villa, AC Milan and RB Leipzig were also interested in the right-back, who can also play on the opposite side of defence.

However, under the terms of the deal, Chelsea have an option to buy Livramento back for £25million, according to the Evening Standard.

Southampton manager Ralph Hasenhuttl was happy to secure the services of the highly rated teenager.

“I am very pleased we have been able to secure Tino’s signing,” he said.

“He is one of the best young players in his position in the country and there were a lot of clubs who were interested in signing him, but finally he chose to join us.

Which Chelsea youngsters could break into the first team this season? Let us know in the comments section.

“I think he has made a very good choice, and this will be an excellent place for him to continue his development and hopefully reach his full potential.

“He is very much in line with the profile of player we want and I think he will adapt very well to our system and methods. To be around the first team of Chelsea at his age speaks about his ability.”

Meanwhile, Livramento was also thrilled to complete the move, pointing to Hasenhuttl as one of the main reasons for him joining the Saints.

“I've been discussing with my dad about what we thought was best for my future. We felt like this was the right time for it to happen and for me to move on,” he said.

“To have interest from a few top clubs, to choose Southampton was sort of a no-brainer. They are a solid Premier League club, and the manager was quite a big factor as to why I wanted to come here and why I wanted to play for Southampton.”

Livramento joins a long list of Chelsea youngsters to leave the club this summer.

Get your hands on your club's special edition 2021/22 annual. Find out more here .