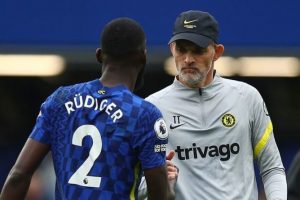 Newcastle are the club on everyone’s lips at the moment, and it is no thanks to their performances on the pitch. The Tyneside are beginning to splash the cash, but Chelsea must put a stop to their shopping spree.

The Blues are set to lose Antonio Rudiger, Andreas Christensen and Cesar Azpilicueta at the end of the season as it stands.

The trio are out of contract at the end of the stadium and they are all being individually being linked with moves elsewhere, though Christensen appears to be the most likely to put pen to paper on a new deal according to reports.

Of the aforementioned, the greatest loss for Thomas Tuchel’s side would be Rudiger, who has been sensational since the German was appointed as manager.

However, talkSPORT have revealed that no matter what offer is put on the table, Rudiger will not remain at Stamford Bridge.

The 28-year-old will be a huge loss and, considering the other departures, it leaves Tuchel with a very subpar defence to try and mount a title charge with next season and beyond.

Over the summer, Sevilla’s Jules Kounde was a top target of the Blues but a fee could not be agreed for the central defender and thus the move never materialised.

However, it is hard to believe that their interest simply vanished into thin air and thus the Frenchman is incredibly likely to still be high on the shopping list of Roman Abramovich.

But the Russian owner must act quickly if he wants to watch his side lift the Premier League trophy soon, otherwise, he risks wasting the £370million (Transfermarkt) that he has spent building a top squad over the last three years.

Newcastle are keen to sign Sevilla defender Diego Carlos and are preparing a second bid for the Brazilian, according to The Sun, having seen a £28m offer rejected previously.

But questions have to be raised as to whether the La Liga outfit, sat in second place in the league behind Real Madrid, would be willing to part ways with both of their central defenders.

Losing Kounde and Carlos in the summer would be a travesty for the Spanish side, and thus Chelsea needs to avoid being the club that this is at the expense of by signing Kounde urgently.

Abramovich has spent big since his club’s transfer ban was lifted and built a squad that is capable of going toe to toe with Manchester City and Liverpool, but he could leave manager Tuchel with a defence that needs a lot of investment.

Thiago Silva and Trevoh Chalobah are the only two certainties to feature for the former PSG boss next season as it stands, and even throwing Christensen into the mix doesn’t make the trio the most rock-solid of back-threes in the league.

Adding Kounde to the team would give Tuchel a top-quality defender for the coming seasons, whilst also ensuring that there is not a ludicrous amount of pressure placed on the shoulders of Chalobah as he continues on his upwards trajectory at the club.

If Newcastle are first in line to talk to Sevilla, given the money they are able to throw at new signings, Chelsea will miss out on their previous top target.

With Rudiger and Azpilicueta destined to pack their bags at the end of the campaign, signing a central defender will become a ‘need’ rather than a ‘want’, though it is avoidable if Abramovich acts quickly in this transfer window.