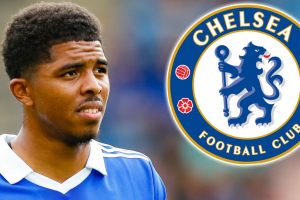 Chelsea are reportedly progressing in talks to sign Wesley Fofana this summer from Leicester despite Brendan Rodgers insisting he is not for sale.

The Frenchman is one of the top targets at Stamford Bridge where Thomas Tuchel is desperate to bolster his defensive options. Antonio Rudiger and Andreas Christensen left when their contracts expired this summer for Real Madrid and Barcelona respectively.

And while Kalidou Koulibaly's arrival from Napoli has replaced one, the Blues are still in the market for another centre-back having missed out on Nathan Ake and Jules Kounde. Several options have been eyed including Pau Torres and Josko Gvardiol.

However, it is Fofana that has caught the eye in west London and is being chased with 90min reporting that Chelsea are progressing with a deal that could see the former Saint-Etienne star move to the club for a fee in the region of £80million. That would be a record move for a defender at the Blues.

Chelsea want to bring in the centre-back before the Premier League season starts this weekend but that might be optimistic considering the time left before their opener against Everton on Saturday. However, Rodgers was insistent that Fofana would be going nowhere and was not for sale.

“Naturally, he’s a top talent,” Rodgers said. “He’s not for sale. He still has lots of improvements to make. He’s very happy here, he really enjoys being here.

“Naturally he will attract the interest of other clubs. Our job, in not signing anyone so far, is to at least keep the players we have. I know that’s the intention of the club.”

Chelsea have not finished in the transfer window after bringing in two players in the shape of Koulibaly and Raheem Sterling. Tuchel is also desperate to bolster his wing-back options and Inter Milan star Denzel Dumfries is a name of interest.

The Serie A side might still need to sell players to balance the books while the Dutchman has attracted attention from the likes of Manchester United and Bayern Munich in the past. If either Fofana or Dumfries do arrive, it could spell the end for Azpilicueta at Stamford Bridge.

The Spaniard has an agreement with Barcelona over a transfer and was set to leave for the Blues triggered a contract extension in his deal keeping him at the club for another year. Marcos Alonso is another who could depart for the Nou Camp but will not be allowed to go unless a replacement is signed.