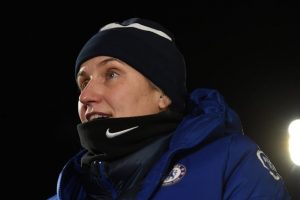 With the WSL title race looking set to go right to the wire, Hayes discusses her delight after the league leaders’ 5-0 win over Bristol City last weekend.

Despite a tricky-looking Champions League last-16 draw against Atletico Madrid, Hayes remains full of confidence, describing the current squad as the “best I’ve ever had”.

Former England manager Powell reflects on leading Team GB at the 2012 Olympics, calling it “one of the best experiences of my life”.

Powell also speaks of her pride at being named as the first woman to win the League Managers’ Association Performance of the Week award for their win over Chelsea.

There’s also an exclusive interview with Manchester City and USA midfielder Sam Mewis as she discusses her move to the WSL and her push for social justice.

Watch the Women’s Football Show this Friday from 6pm on Sky Sports Football.