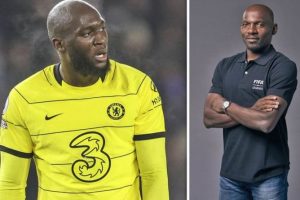 Chelsea hero Geremi believes Romelu Lukaku is one of the best strikers on the planet despite his current slump. The retired Cameroon footballer won two league titles at Stamford Bridge. And he’s also hit back at critics of old boss Jose Mourinho, who has endured a tough first year at Roma.

Chelsea initially wanted to sign Erling Haaland back in the summer transfer window, with Thomas Tuchel a huge admirer of the Borussia Dortmund hitman.

Yet, when it became clear the Norway international would cost too much, they ended up re-signing Lukaku for a huge £97.5million instead.

So far, however, it’s been a mixed first season back at Stamford Bridge for the Belgium international.

Injuries haven’t helped his cause, with the 28-year-old only returning last month after a month on the sidelines.

Yet Lukaku has been in the spotlight ever since he gave an interview to Sky Sports Italia where he flirted with a move to Inter Milan.

And with just three goals from his last 10 appearances, and none this year, the former Manchester United striker has found himself under scrutiny.

Geremi won two league titles during his time with Chelsea and knows all about the pressures of playing for the Stamford Bridge outfit.

And he’s now defended Lukaku, insisting the Blues’ No 9 is one of the best five players on the planet despite his current issues.

“For sure,” he told Express Sport via Freebets.com when asked if Lukaku was a striker capable of firing Chelsea to the biggest titles.

“Every big club would love to have him.

“The way he behaves on the pitch, it doesn’t reflect what comes out on the newspapers.

“For me, Tuchel his boss has to handle it and help him come out of this situation.”

Geremi won both of his league titles while playing under Mourinho, whose stock within the footballing world has plummeted in recent years.

He was sacked by Chelsea in 2015 when they were in the midst of a relegation battle, having previously guided them to title glory earlier in the year.

Ever since, Mourinho’s troubles have been exacerbated.

He won two trophies at Manchester United before being sacked and replaced by Ole Gunnar Solskjaer in December 2018.

And Mourinho lasted just 18 months at Tottenham before losing his job back in April, days before the Carabao Cup final defeat to Manchester City.

These days, the Portuguese is managing Roma in Italy.

Yet it’s been a problematic first season at the club for Mourinho, whose side are currently on track to miss out on both Champions League and Europa League football.

Geremi has, however, hit back at critics of Mourinho – defending his old boss to the hilt.

“For me, Jose is one of the best-ever managers that I’ve worked with,” he said.

“He is the best manager because he knows how to handle players on the pitch, but also off the pitch. Controlling big players, when he has them in the dressing room, just not on the pitch it’s also off of the pitch.

“Jose Mournho has that capacity.

“Those who criticise his career now, don’t know football. I’m sorry but what I would ask is show me one manager, or one club, who is always at the highest level.

“It’s not possible. Football is not a science, it’s always going up and down.

“Maybe now he’s having a bad moment because you will never see someone always ahead in football, it’s difficult.”