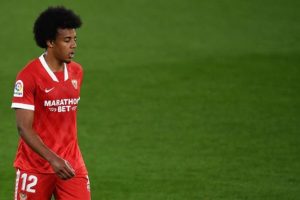 Chelsea are desperate to land Jules Kounde from Sevilla this summer as they look to launch an assault on the Premier League title. But the player’s £68million release clause is proving to be a stumbling block.

The Blues may try to bypass the fee by offering the Spanish club players in return for the defender.

Kurt Zouma was apparently offered to Sevilla earlier in the summer but the centre-back is unwilling to move to Spain, favouring a move to a fellow Premier League club instead.

That means Chelsea will have to look at alternative players they could throw at Sevilla to at least reduce the fee needed to secure Kounde.

Express Sport takes a look at which Chelsea players could move in the opposite direction based on their Transfermarkt market value.

If Zouma doesn’t want to make the move to Spain, maybe Andreas Christensen would be more willing.

Chelsea would ideally prefer to keep the Denmark international but, if Kounde does arrive at Stamford Bridge, the club would have an excess of centre-backs.

Christensen has been tipped for a big future but hasn’t quite managed to cement his place in the backline, meaning Chelsea could cash in on the player.

With a current market value of £27m, Chelsea would receive a decent amount for a player who joined the club for free in 2012.

Inter Milan have apparently been chasing the player and he may be keen for a move to Spain if he can command a regular starting place.

Alonso, who is valued at £10.8m, has come under fire in the past for his shaky defensive performances but has provided the Blues with a prodigious attacking threat, notching 21 top flight goals during five years at Stamford Bridge

There is no doubt that Callum Hudson-Odio is a talented youngster but it’s a struggle to see where he fits in under Tuchel.

The winger was impressive under previous boss Frank Lampard but fell out of favour when the German manager arrived in January.

He failed to appear in the Champions League after the last 16 stage and faces huge competition for a starting place this time out.

Hudson-Odoi has been linked with Bayern Munich this summer and, with a value of £28.8m, the 20-year-old would certainly make a dent in Sevilla’s asking price for Kounde.

Tammy Abraham is certainly a player Chelsea are willing to lose, with the England striker being heavily linked with a move away from the club this summer.

Roma are interested in signing Abraham and are willing to pay £34m to land him, but apparently he would prefer to move to a Premier League club.

Like his team-mate Zouma, Abraham may veto any attempt for the club to use him as a bargaining chip, meaning Chelsea may have to fork out more than they would like in order to get the deal for Kounde over the line.