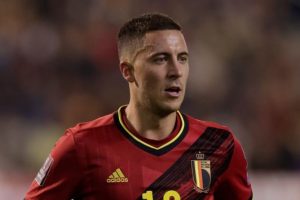 Chelsea could significantly boost their Premier League title hopes by brokering Eden Hazard’s sensational return to the club in January. Thomas Tuchel could end Hazard’s horror spell at Real Madrid to bolster his attacking options as Chelsea’s battle for supremacy with Liverpool and Manchester City heats up.

In the final third, the Blues aren’t exactly short of firepower when Tuchel’s entire squad is available.

But early-season injury issues among his attacking ranks could lead to Tuchel eyeing reinforcements in January.

And securing Hazard for the second half of the campaign would provide a boost in quality and morale amid a fierce title battle.

JUST IN: Lampard laid out Chelsea plans in secret meeting before his sacking

ABC report Real want to cash in on the 30-year-old next summer, but would be open to sending him out on loan for the remainder of the season.

It could be a good opportunity for Chelsea to welcome him back to Stamford Bridge and insert an option to buy in his deal.

Hazard’s return would undoubtedly present a financial risk, but it would be a masterstroke if he can rediscover his best form at the club.

After starting just four La Liga games this season, failing to score in 10 league appearances altogether, the writing could be on the wall regarding his future in the Spanish capital.

In October, he admitted that the Belgium international was out of favour and that he wouldn’t stand in his way if he wanted to leave.

He told reporters: “Never in my career as a coach have I forced a player to stay when they want to leave. In my own personal opinion, I don’t have any doubts about that.

“He has absolutely everything but he has to put up with the situation. Right now he has a coach who prefers other players.”

It’s all currently speculation, but Hazard’s fringe status in Ancelotti’s plans at the Bernabeu is factual.

Chelsea already arguably boast the most potent attacking depth in the Premier League, so adding the club icon to that would be impossible not to excite.

After guiding the club to Champions League glory in his debut campaign, following it up with a league title would instantly make Tuchel an icon himself.

And Hazard’s January arrival could be the key, as unlikely as that seems in this moment in time.