Chelsea handed huge fitness boost ahead of clash with Liverpool 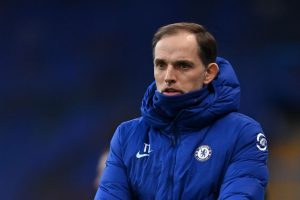 Chelsea have been handed a huge boost ahead of their crunch clash with Liverpool as Thiago Silva has returned to full training.

The veteran defender has been sidelined with a thigh injury since the victory over Tottenham at the start of last month, but could be in contention for Thursday's trip to Anfield.

Silva had returned to training ahead of the fixtures against Southampton, Atletico Madrid and Man Utd, but was not given the green light to rejoin his teammates.

However he was involved in the full session at Cobham on Tuesday and is now pushing for a place in Thomas Tuchel's squad.

The Blues have coped fairly well in Silva's absence, keeping four clean sheets in that time and conceding just twice.

But Tuchel will no doubt be buoyed by the Brazilian's availability ahead of a crucial fixture in the top four race.

It looks like he will also have Callum Hudson-Odoi available as he was spotted among Chelsea's players despite being substituted at half-time during Sunday's 0-0 draw with United.

After emerging from the tunnel after the break the winger was seen to be sporting bandaging round one of his thighs, though it seems there are no lasting repercussions.

Meanwhile, Liverpool have been handed boosts of their own, with three stars in line to make a comeback.

All the latest big football stories, transfer exclusives, hard-hitting analysis and unmissable features will be sent directly to your inbox every day.

Brazilian duo Alisson and Fabinho are both in contention, while forward Diogo Jota could also feature for the first time since December, providing he has shaken off a recent illness.

"Alisson and Fabinho, I’m pretty sure [will be available]," Klopp told Liverpoolfc.com. "With Diogo, he was with us in the hotel [for the Sheffield United fixture], but he got sick overnight and we had to send him home.

"It depends how quick he will recover, obviously.

"He was in the squad and as I said before, he trained with the team and it all looked really good but unfortunately he got sick overnight.

"I think he will be available, but I don’t know."