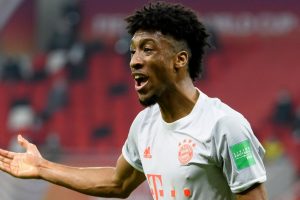 Chelsea are being linked with a whole host of big name players as the summer transfer window continues to hot up.

The Blues are in the market for a centre-half, a central midfielder and a striker as Thomas Tuchel looks to build on last season’s Champions League success.

Robert Lewandowski, Erling Haaland and Raphael Varane are three stars who have been bandied about the Stamford Bridge rumour mill already this summer.

And Daily Star Sport have news of three more players who could be on their way to west London if the German boss gets his way over the coming weeks and months.

It’s been reported in recent weeks that Manchester United and Chelsea are both interested in signing Bayern Munich winger Kingsley Coman.

Neither club has stolen ahead in the race for his signature, but the pair will be encouraged by news coming out of Germany this weekend.

According to Sky Germany and RMC Sport, the 24-year-old wants to leave the Allianz Arena, raising prospects of a move to Stamford Bridge.

Who would you like to see Chelsea sign this summer? Let us know in the comments section.

Feyenood midfielder Orkun Kokcu could be on his way to west London with a little help from Blues legend Didier Drogba.

No deal has yet been confirmed, but Drogba’s alleged presence should increase Chelsea’s chance of signing the sought-after 20-year-old.

Another Blues legend, this time Cesc Fabregas, has issued a hands-off warning in his old club’s pursuit of Aurelien Tchouameni.

Tchouameni has had a fantastic season in Ligue 1 and has been linked with a £30million move to the Premier League.

But Fabregas, who is the 21-year-old’s team-mate at Monaco, wants his former club to stay well away from the French star.

In a Q&A on Twitter, he said: “He has the potential to be the complete midfielder. Modern midfield player, but we need him still… sorry.”

READ MORE:Euro 2020 stars punching above their weight with WAGs from Harry Maguire to Luka Modric