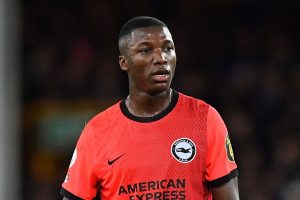 Chelsea have received encouragement in their pursuit of a January deal for Brighton and Hove Albion midfielder Moises Caicedo. The Seagulls have set their sights on a Liverpool and Manchester United transfer target, indicating they are preparing to part ways with their prized midfielder.

Todd Boehly has flaunted his deep pockets since completing a takeover at Stamford Bridge last year, splashing over £400million across his two transfer windows as owner.

He has backed Graham Potter with six new recruits this month, including an £88m deal for Shakhtar Donetsk winger Mykhaylo Mudryk.

But Chelsea’s business isn’t expected to be over, with Potter eyeing midfield reinforcements ahead of losing Jorginho as a free agent in the summer.

The Blues have so far failed with the attempted capture of the Young Player of the World Cup Enzo Fernandez, with Benfica demanding his £105m release clause be triggered.

And they are understood to have turned to Caicedo as an alternative target, already seeing a £55m bid rejected by the south coast outfit.

However, Brighton are reportedly on the lookout for potential replacements heading into the final week of the transfer window.

According to The Independent, RB Leipzig have turned down an offer for Mali midfielder Amadou Haidara.

The 24-year is open to a move to Brighton this month, but Leipzig are unwilling to lose him amid their battle to prevent Bayern Munich from lifting an 11th successive Bundesliga title.

Liverpool and United have been credited with interest previously but aren’t expected to return to the frame until the summer when Haidara will be allowed to leave due to a clause in his contract.

Brighton could be in the same boat with their stance on Caicedo, with time running out to recruit a replacement as Roberto De Zerbi spearheads a challenge for Europe.

The Seagulls’ active efforts to acquire a new midfielder amid Chelsea’s looming interest will only offer the Londoners optimism that they could cash in on the 21-year-old Ecuadorian.

Failing to sign Caicedo before the winter deadline could prove fatal for Chelsea, with Liverpool and United among clubs likely eyeing him if he ends the season in the same manner he started.

So another bid to test Brighton’s resolve could be in the pipeline as Boehly continues to make a mark in English football.