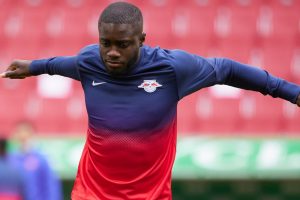 Chelsea are looking to steal a march on their rivals in the race to sign Dayot Upamecano.

A transfer away from RB Leipzig for the highly-rated centre-half appears inevitable this year.

But the Bundesliga club face losing Upamecano come the summer when his £40m release clause activates.

Teams across Europe and from the Premier League are keen on the France international.

Manchester United, Liverpool and Arsenal have all been linked with Upamecano in recent times, while Real Madrid, Barcelona and Bayern Munich have too.

However, Chelsea are now in the mix and want to snap up the Leipzig star to strengthen their defence.

A fee of £40m is a bargain price for one of Europe’s hottest rising prospects.

He already has ample experience at the top level and in the Champions League.

And Frank Lampard’s side are expressing an interest in activating his clause this summer, according to the Daily Mail .

Leipzig could sell this month for a higher price, but such is Upamecano’s importance to the team, they are willing to miss out on additional cash to keep him for six more months.

At Stamford Bridge, he would be expected to slot straight into their starting XI for next season.

Experienced veteran and summer signing Thiago Silva has been a revelation at the heart of Chelsea’s defence since arriving from PSG, but he cannot play every game.

Kurt Zouma has been his regular partner, while there have been doubts over the futures of Antonio Rudiger, Andreas Christensen and Fikayo Tomori for some time.

Chelsea want long-term solutions with Lampard moulding his squad following a £200m summer spree, and Upamecano would certainly fit the bill if they can win the battle for his signature.