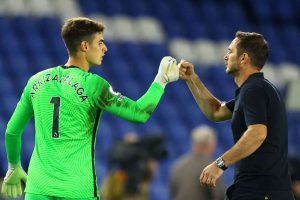 Chelsea legend Frank Lampard has remarkably revealed club directors were totally on board with him wanting to bench £70m goalkeeper Kepa Arrizabalaga and even sanctioned the money required to sign his replacement.

The Spanish keeper has always been a controversial figure at Stamford Bridge since his big-money move from Athletic Bilbao in 2018.

Signed by Maurizio Sarri, Arrizabalaga famously refused to be substituted in the Carabao Cup final against Manchester City, a match Chelsea went on to lose on penalties.

Then, during Lampard's tenure, the Ondarroa-born 'keeper suffered from a considerable drop in form; the Blues conceded 47 goals in 33 Premier League matches with him between the sticks.

The Chelsea boss decided a change was needed and forked out £22m to sign Edouard Mendy from Ligue 1 side Rennes.

Speaking to Gary Neville as part of his YouTube series The Overlap, Lampard states it was Arrizabalaga's lack of confidence that made the change inevitable.

He said: "When you're aware of a £70 million goalkeeper that you take out of the team you know it's not a simple decision.

"Kepa was having a tough time, there's no bones about it, in the first season and I think he'd say that himself.

Did Edouard Mendy deserve the Ballon d'Or? Let us know in the comments section.

"From the conversations we had he was very open that it was a tough time for him and that position is different to every other position on the pitch because you're getting it all the time and a lack of confidence is going to hit you harder than anything in that position.

"I tried to have open conversations with him and it got to the point where it felt like I just had to make a change.

"There was no feeling of pressure from above is what I'm trying to say but it becomes very high profile when you do it and there's that price tag on a player.

"But he was having a tough time and for that reason, I'm not saying he had to come out of the team because that sounds a bit dramatic, but I had to make a decision.

"There were supportive of that [Lampard wanting to sign Mendy]. I don't think I'm being harsh on Kepa here because he is a talented goalkeeper but he had a tough year when I was there for whatever reason but I felt it was a position we could improve.

"Mendy was the result of that and he's obviously been fantastic since he's been at the club.'