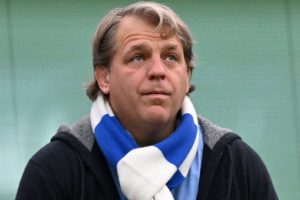 Chelsea have reportedly decided on their next two transfers for Graham Potter, having already spent over £400million since Todd Boehly and co took over at Stamford Bridge. Noni Madueke became the latest signing, after Mykhaylo Mudryk, Joao Felix, Benoit Badiashile, Andrey Santos and David Datro Fofana joined the club already this month.

Chelsea could take their spending within two windows to the £500m mark as The Telegraph has reported that the remaining priorities this window for the Blues are a backup right-back to Reece James and at least one new midfielder.

Lyon’s teenage defender Malo Gusto is set to be the latest player targeted by the Blues, as they are lining up a bid for the French under-21 international. While James is considered one of Chelsea’s stand-out players, his injury record leaves a lot to be desired and it has meant that Trevoh Chalobah and Cesar Azpilicueta have had to play significant minutes in his absence.

The potential Gusto signing is part of a strategic plan to provide James with cover in his position and would allow Potter to continue playing with dynamic wing-backs if he and Ben Chilwell are absent again. Lyon are hoping to keep Gusto on loan for the remainder of the season, but Chelsea want to sign him now and are hoping they can tempt the Ligue 1 side into a sale this month.

Chelsea are also hoping for at least one midfield addition, and will reportedly reinitiate transfer talks with Benfica for their World Cup star Enzo Fernandez. The Blues walked away from negotiations previously, despite offering over the Argentine’s £103m release clause, but could attempt once again to lure him to west London despite the Portuguese side’s public stance that he will not leave unless the release clause is paid in full. Chelsea offered a higher fee than £103m earlier this month but paid in three instalments.

Brighton’s Moises Caicedo is reported to be another midfield target for Chelsea, as the dynamic box-to-box star could be reunited with former boss Potter. The now-Blues boss brought the Ecuadorian to the Premier League in 2021 and nurtured him into one of the best midfielders in the league, though his prior comments may have hindered Chelsea’s attempts at getting him at a reasonable fee.

“In football you never know, but we are quite calm and confident,” Potter said in regards to a reported £42m bid from Liverpool.

“You’d probably get his boots for that from the chairman – maybe! £100m? They can try. It doesn’t surprise me that people are looking at him because he is playing at a fantastic level.

“As soon as you do research on him you realise he is a top kid, great person, young, playing in the Premier League, has all the attributes to play at the very, very highest level.”