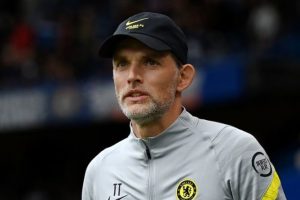 Chelsea are set to suffer from a new FIFA ruling that sets limits on the amount of players a club can loan out. Fresh regulations that cap the number of international loans in and out of clubs are set to come into play in July in an attempt to prevent stockpiling.

The new rules will limit clubs to a maximum of eight international loan signings in and eight loaned out.

The rules do not cover domestic loans but FIFA has said that the Football Associations will need to bring their own laws in line with theirs by July 2025. U21 players and club-trained stars are also exempt – meaning the likes of Conor Gallagher is not included.

Chelsea have a reputation for sending many stars out on loan – and are even reported to have a separate training squad for players who they intend to send on temporary spells.

But the new laws could mean that boss Thomas Tuchel needs to sell a couple of squad members. Express Sport looks at who might depart permanent.

Striker Batshuayi has not made an appearance for the Chelsea first team since February 2020.

He has since taken in a second loan spell at Crystal Palace before joining Besiktas on a temporary deal at the beginning of this season.

Batshuayi has scored nine goals in Turkey – hardly the kind of form that is going to earn a key role in Thomas Tuchel’s side next term.

The 28-year-old has a contract at Stamford Bridge until 2023 but might want to seek a permanent departure a year early.

He will be keenly remembered for scoring the Premier League title-clinching goal in 2017.

Currently on loan at Reading, Baba Rahman is on the sixth separate temporary spell away from Chelsea since joining the Blues in 2015.

He has only played 23 times for the club’s first team.

Having never really proved that he could be a suitable option to successive Chelsea bosses, the 27-year-old will likely choose to move on if he finds himself stuck at Stamford Bridge and unable to go on loan after July.

Rahman will have another two years on his contract when he returns to the club from Reading.

A move to Alaves in the summer was the fifth time that centre-back Miazga has departed Chelsea on loan.

The USA international was signed from New York Red Bulls in 2015 but has made just two appearances for the club.

Both of those have come in the Premier League. He has not appeared for the Blues April 2016 when Guus Hiddink was caretaker head coach.

Four managers have come through the Stamford Bridge door and have opted not to use Miazga. A permanent departure might seem sensible, even if the 26-year-old only has a year on his deal.

It may come as a surprise to some that the £40million signing is still on Chelsea’s books.

The Blues fought off serious competition to sign the Frenchman from Monaco in 2017.

But Bakayoko has instead spent the majority of his Chelsea career out on loan.

The 27-year-old has played 43 times for the West Londoners but has had two temporary spells with AC Milan, where he is playing this season, and one each at Monaco and Napoli.
Source: Read Full Article