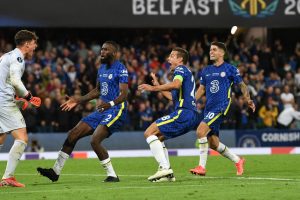 Kepa Arrizabalaga was Chelsea’s unlikely hero in their Super Cup win over Villarreal on Wednesday night and the celebrations showed the good work Thomas Tuchel is doing at the club.

Kepa was summoned from the substitutes’ bench in the dying minutes of extra-time with the score at 1-1 in Belfast.

The back-up goalkeeper replaced first-choice stopper Edouard Mendy and was plunged straight into the action of a penalty shoot-out following goals from Hakim Ziyech and Gerard Moreno.

He was immediately up against it when Kai Havertz’s opening spot-kick was pushed away by Sergio Asenjo.

But, backed up by excellent strikes from his team-mates, Kepa pulled off two confident saves to ensure Chelsea won 6-5 on penalties to claim the Super Cup at Windsor Park.

The reaction when he dived down low to his right to keep out Villarreal captain Raul Albiol’s final effort showed the team spirit inside the Blues camp.

Kepa might be expected to be on the fringes of the squad, given he has lost his place to Mendy despite costing the club £71million from Athletic Bilbao in 2018.

What did you make of Thomas Tuchel's decision to change goalkeeper before the shoot-out? Have your say in the comments section below.

But as soon as the 26-year-old had saved Albiol’s penalty, his team-mates sprinted from the halfway line to mob the Spaniard.

It was a heartening sight for Chelsea fans, who were given another taste of the team spirit Tuchel has fostered since taking over from Frank Lampard in January.

After the celebrations, Tuchel explained to BT Sport why he made the decision to switch keepers for the penalties.

"It was not spontaneous,” he said. “We talked about it with the goalkeepers after the first cup game against Barnsley. We had some statistics. We were well prepared.

"Kepa has the best percentage at saving penalties, the analysing guys and goalkeeping coaches showed me the data.

"We spoke to the players that this could happen when we play in knockout games. It's fantastic how Edouard accepted it.

"There is proof that Kepa is better in this discipline. They're team players.

"Edouard does not show the pride to not step off the field. He was happy to do it for the team and take this for the team."