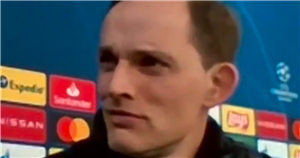 Chelsea boss Thomas Tuchel was left holding back the laughs after being translated in his press conference.

It came as the Blues out one foot in the semi-finals of the Champions League with a sturdy performance against Porto.

Mason Mount and Ben Chilwell gave them two vital away goals in a 2-0 win in Sevilla.

After their 5-2 thrashing at the hands of West Brom at Stamford Bridge, Chelsea dispelled any worries over a lack of mentality.

Though they did so against a hearty display from Porto, who regularly tested the visitors' defence with Edouard Mendy proving pivotal to keeping a clean sheet.

Nevertheless, Tuchel will be over the moon with the result – which could set up a semi-final clash against either Real Madrid or Liverpool.

And the German was in a mischievous mood in his press conference when talking to HTV.

As they translated what he said into Portuguese, Tuchel looked bemused at times and could not contain a giggle.

At the end, something particularly jerks him and he appears bemused at the interpreter before turning to the camera and gives a cockeyed look.

As for the result, Tuchel was over the moon with Mount's performance after admitting the England midfielder is a key player at Stamford Bridge.

"The finish was clinical and excellent from Mason," said the Chelsea boss.

"He has the quality to do this and to do it in a quarter-final is a big step for him and a big help for the team.

"He is a very important player for our squad at a young age.

"The first goal was very important for us.

"It came in a moment after which we had suffered a lot – the team was too tense.

"We lacked the freedom. Our game was a bit static."

READ MORE:Three things Thomas Tuchel got right and one he got wrong as Chelsea beat Porto