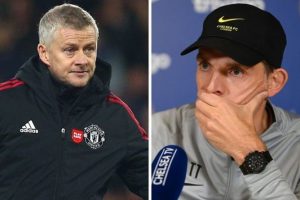 Chelsea boss Thomas Tuchel has warned Manchester United’s next permanent manager that it won’t be “easy” for them to take over midway through the season. The Red Devils are on the search for their next manager after Ole Gunnar Solskjaer was sacked on Sunday.

It brought an end to Solskjaer’s three-year reign in charge of Old Trafford, establishing the club as a top-four side once again after years in the wilderness.

But this season has proven to be a disaster with United losing five of their opening 12 Premier League games.

Saturday’s 4-1 thrashing at the hands of Watford proved to be the final straw for United’s owners in deciding to sack Solskjaer.

Tuchel was asked to give his reaction to Solskjaer’s sacking at United, but the German head coach gave little away.

“Not too much actually because we don’t think about Man United.

“We are occupied with the Juventus game and I will not comment on other club’s coaching decisions.

When pressed to answer on club’s changing manager midway through the season, Tuchel was careful in his response given that he took over at Chelsea back in January.

“I cannot say it is easy because that will devalue our efforts!” Tuchel said.

“I am in the best place possible, I am a happy coach and happy person. It is perfect.”

Tuchel took over at Chelsea earlier this year after Frank Lampard was dismissed.

It proved to be a masterstoke by Chelsea’s hierarchy as Tuchel made them tough to break down.

And he eventually led them to glory in the Champions League, defeating Manchester City in the final.

Chelsea sit top of the Premier League with a third of the season already played, but have both Manchester City and Liverpool in close proximity.

They’re back in Champions League action on Tuesday night against Juventus, but will then turn their attentions to the weekend when they take on United.

Michael Carrick looks set to be in charge after being named caretaker manager, with an interim boss expected to be appointed until the end of the season.