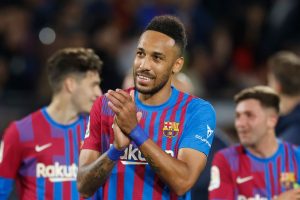 Chelsea boss Thomas Tuchel is said to be putting 'pressure' on owner Todd Boehly to make a good offer for Pierre-Emerick Aubameyang as he looks to strengthen his forward line.

The Barcelona forward could be on the way out of his current club following the arrival of Robert Lewandowski and Raphinha having joined them on a free transfer from Arsenal in January.

Despite scoring an impressive 11 goals across just 17 La Liga outings, the 33-year-old could be on his way back to the Premier League following the departures of Romelu Lukaku and Timo Werner from Stamford Bridge.

They add that Tuchel wants to reunite with the forward whom he worked with at Borussia Dortmund, who scored 68 goals across 128 Premier League fixtures for Arsenal after joining in 2018.

However, the report adds that Barcelona would be more keen to sell Memphis Depay than the striker, who is said to be in negotiations with Tottenham.

Where will Chelsea finish in the Premier League this season? Tell us in the comments section below.

Tuchel commented on the reported interest in Aubameyang last week having been asked about the 79 goals he scored across 95 games under his management.

Having scored a total of 13 goals across 23 outings for his current side, Aubameyang is a favourite of Barcelona boss Xavi, as he detailed last season.

With Xavi saying of his striker earlier this year: “Auba has been a gift from heaven.

"He is a positive player, he has come into the dressing room very well, he adapts well to the team, he creates scoring chances, he scores, he presses, he is a privilege to train."