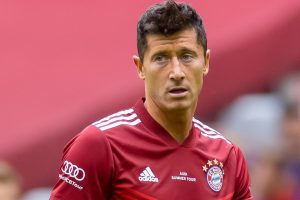 Chelsea turned down the chance to sign Robert Lewandowski before completing a £97.5million deal for Romelu Lukaku, according to reports.

Lukaku has sealed a return to Stamford Bridge seven years after departing to join Everton, calling time on his successful spell at Inter Milan to become the Blues' club-record signing.

Thomas Tuchel was keen to add a new centre-forward to his ranks this summer amid concerns over Timo Werner's form in front of goal and talk of a potential exit for Tammy Abraham.

The European champions were also linked with a move for Lewandowski, who scored a staggering 48 goals in 40 appearances for Bayern Munich last season.

Earlier this summer rumours suggested the Poland international was on the hunt for a new challenge after winning every major honour possible in seven years at Bayern.

Do you think Chelsea were right to sign Romelu Lukaku instead of Robert Lewandowski? Let us know in the comments section below.

According to BILD journalist Christian Falk, via Goal, Lewandowski's agent Pini Zahavi offered Chelsea the chance to sign his client for around £68million.

However, the Blues did not want to pay that much for a 32-year-old in the twilight of his career and instead regarded a £97.5million deal for Lukaku, 28, as a more suitable long-term investment.

Lukaku first joined Chelsea from Anderlecht back in 2011, making just 15 appearances and spending the majority of his time out on loan before securing a permanent switch to Everton in 2014.

After bagging 87 goals in 166 games for the Toffees, he landed a £75million switch to Manchester United and netted 42 goals in 96 appearances before being offloaded to Inter in 2019.

His time in Italy proved a major success, with a return of 64 goals in 95 games helping Inter reach the 2020 Europa League final and win their first Scudetto since 2010 last season.