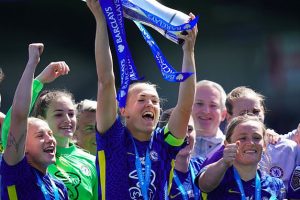 As Sam Kerr wheeled away celebrating the goal that put Chelsea back at the top of the Women’s Super League table, she told boss Emma Hayes ‘today is our destiny, today was always our destiny.’

Kerr scored two stunning volleys in the second half as the Blues came from behind to beat Manchester United 4-2. It was a victory that saw Chelsea become the first team to win three WSL titles in a row.

Every time Chelsea have needed a spark this season, the forward has stepped up. Kerr’s equaliser put Chelsea back at the summit, their ‘destiny’, as she told her manager. And after Guro Reiten had made it 3-2, Kerr scored another sensational volley to give her side breathing space. 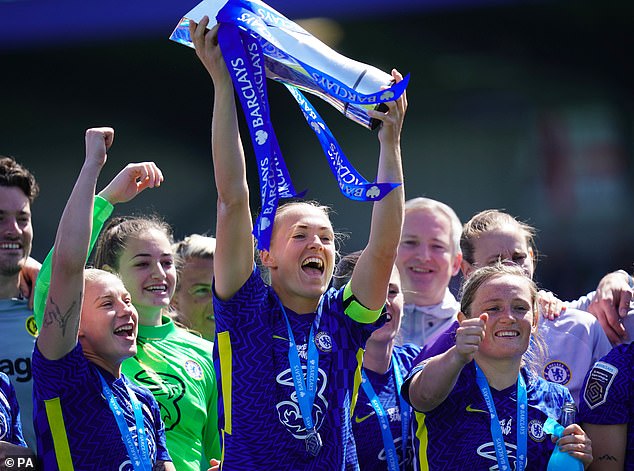 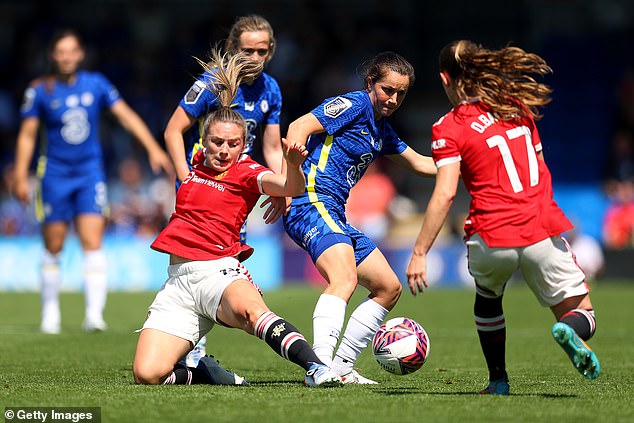 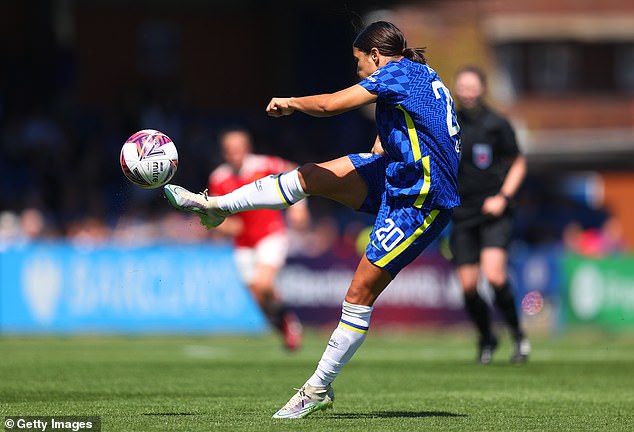 ‘I’m not known for my worldie goals but the thing that I’m known for is getting it done when it matters,’ said a jubilant Kerr. ‘The most important thing for me is scoring goals and making sure the team is at the top of the table when the season ends.’

Hayes had always been adamant the title race would go down to the wire with north London rivals Arsenal breathing down their necks.

The Gunners led the way for the first half of the season after a 3-2 victory over Chelsea on the opening day of the season. But a 2-0 defeat by Birmingham at the start of the year handed the advantage back to the blue half of London. 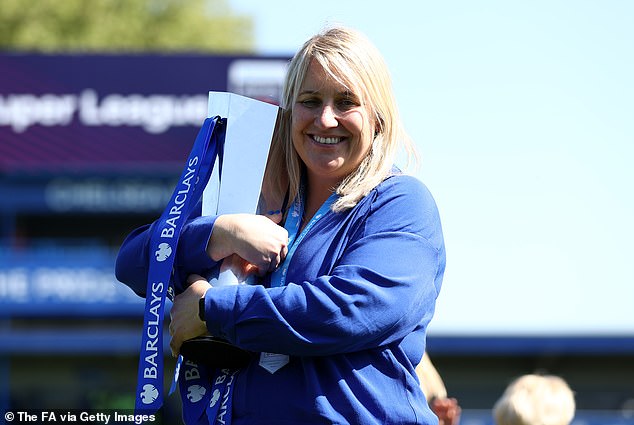 As a result, Emma Hayes’ side have become the first team to win three WSL titles in a row 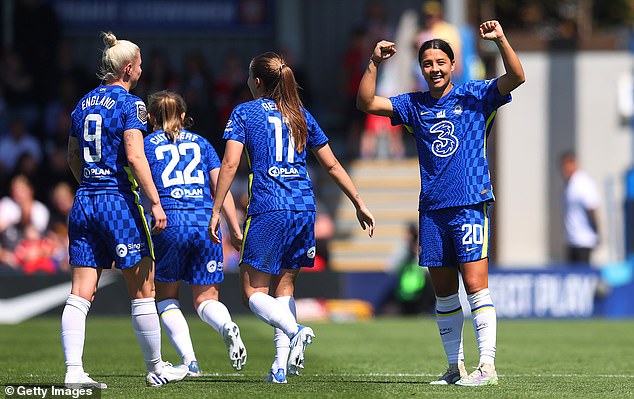 ‘I’m relieved it’s over, hallelujah,’ Hayes said. ‘This is by far and away the best one (title).

‘Arsenal have had an amazing season but I knew on that opening day of the season, okay, be happy with your win, but this is not where you win leagues,’ Hayes added. ‘I know you win it at the back stretch.

However, I know you cannot lose more than two games in this league and you certainly cannot draw four games. We’re title winners because we won enough games for us to be at this place but we’ve done it from a difficult place. We were down to 13, 14 players through eight games. That for me was where the title was won.’

A final day clash with United, who needed to win to have any chance of finishing third, always looked like a tricky final match for Chelsea – and it proved to be.

It was United who started on the front foot and in the 13th minute Martha Thomas put them ahead, meeting Katie Zelem’s free-kick to head into the top corner.

Erin Cuthbert quickly restored the calm with a superb half-volley to bring Chelsea level five minutes later. But United were ahead again mid-way through the first half when Ella Toone’s volley deflected off Jonna Andersson and into the near post.

Hayes wasted no time in changing tactics as she brought on Beth England and Ji So-Yun at half-time and her decision was vindicated as Chelsea levelled within a minute of the restart. England’s cross found Cuthbert in the box. Her shot was blocked and bounced up to Kerr, who volleyed into the top left corner.

Five minutes later, Chelsea were ahead. Ji played through Pernille Harder on the left-wing and the forward cut-back for Reiten, who side-footed the ball past United goalkeeper Mary Earps.

Kerr has come up with many title-winning moments throughout the season. There was her stoppage time winner against Aston Villa back in March and her two goals in narrow 2-1 victories over Tottenham. But she saved the best for last.

Earps’ pass hit Reiten and bounced up to Kerr 25 yards out from goal. The forward chested the ball and volleyed goalwards. Earps scrambled to get back but it was no use as the ball flew into the net.

‘The second [goal] was world class, it was outrageous, audacious,’ Hayes said. ‘She’s the best for a reason and she stepped up once again for this football club. I said “come to Chelsea and you’ll win trophies,” I can sit here confidently and say we both made the right decision. We’re both made for Chelsea and we both love days like today.’