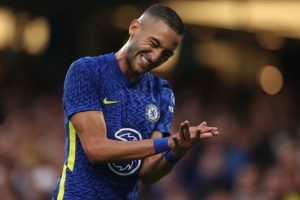 Hakim Ziyech sent a strong message to Thomas Tuchel with his superb performance in Chelsea’s pre-season friendly draw against Tottenham on Wednesday. Ziyech scored both goals as he started his case to be a big player for the Champions League winners, who are targeting Inter Milan striker Romelu Lukaku in the transfer window.

Chelsea have had two bids rejected by the Serie A giants this summer for Lukaku, but are believed to be ready to table a third offer that would exceed £100million.

And the saga took a fresh twist on Wednesday night as Sky Sports reported that the striker has told Inter he wants to return to West London if a fee can be agreed.

The arrival of Lukaku would ramp up the competition for places at Stamford Bridge, with Timo Werner, Kai Havertz and Callum Hudson-Odoi all vying for places in attack alongside the striker.

And Ziyech staked his claim for a starting spot in next Wednesday’s UEFA Super Cup clash against Villarreal with an eye-catching display against Spurs.

The 28-year-old has been linked with a move away from Chelsea this summer amid the increasing competition for places, with speculation suggesting he could join Olivier Giroud at AC Milan.

He showed flashes last season of the talent which earned him a £36m moe from Ajax, but made only 15 starts in the Premier League and three in the Champions League, with a couple of injuries hampering his progress.

But at Stamford Bridge on Wednesday night he looked like he meant business, firing Chelsea into a two-goal lead with a strike in each half.

Starting on the right, he would often drift inside to collect possession or drop into the half-space between Sergio Reguilon and Eric Dier, causing Spurs no end of problems.

Ziyech gave Chelsea the lead after N’Golo Kante won the ball in midfield, with Werner’s run opening up space for the winger to drive home with a superb strike.

He added another after the break, before Tottenham fought back with goals from Lucas Moura and Steven Bergwijn.

Ziyech also set up Werner to find the net – with the striker rounding new Spurs goalkeeper Pierluigi Gollini to fire into an empty net after being played in his team-mate.

As happened so often last season, the striker’s effort was ruled out for offside.

But replays showed the German international had timed his run perfectly, with no VAR available in pre-season to overturn the decision.

So as well as showing his eye for goal, Ziyech has indicated that he can provide the ammo for the likes of Werner and Havertz next season.

And he would no doubt relish the challenge of doing the same with Lukaku, who has scored 30-plus goals in all competitions in each of his two seasons with Inter.

It remains to be seen whether Ziyech will land a starting spot against Villarreal or in the Premier League opener at home to Crystal Palace a week on Saturday.

But with plenty of options needed as the Blues look to compete for silverware on four fronts next term, Ziyech could get his chance to shine.